Legislators just increased school funding another $90 million per year, bringing the total being phased in through the 2023 school year to a little over $1 billion in new state aid, but 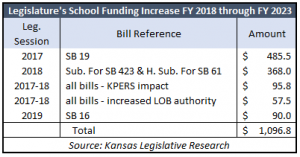 school lawyers say that’s still not enough.  In oral argument before the Kansas Supreme Court yesterday in Gannon vs. State of Kansas, they asked for another $270 million per year.

Kansas Legislative Research produced a report for a legislator last year showing the combined effect of legislation passed in 2017 and 2018 was $949 million in state aid and $57.5 million for increased Local Option Budget authority.

Gannon vs. State of Kansas was filed on election day in November 2010.  Yesterday’s hearing was the seventh time it’s been before the State Supreme Court, prompting Justice Eric Rosen to ask the schools’ lawyer, “Is there ever crossing the finish line in these types of cases…is this just indefinite?”

Alan Rupe, the attorney for the schools suing the state, said he thinks they may be getting close to the end if the court agrees with schools and orders another $270 million per year.

Justices are likely to issue their ruling by a self-imposed deadline of June 30. Plaintiffs argued that legislators’ recent attempt to provide constitutional funding to schools fall short. Lawmakers approved legislation that will add $90 million in additional funding each year over the next four years to account for inflation. He said lawmakers increased funding to keep pace with inflation for only part of funding.

“If school finance were a loaf of bread, the legislature applied inflation to a single slice, and that’s not how math works,” he told the Court.

Kansas Solicitor General Toby Crouse, arguing on behalf of the state, told justices that majorities in both the House and Senate, the Governor and the state board of education all agreed that the extra $90 million per year would satisfy the court’s ruling last summer.

“Everyone agreed that this is what would satisfy not only the constitution, but also the best interests of the children,” Crouse said.

Initially, Schools for Fair Funding, the plaintiffs in the case, agreed, telling lawmakers in committee hearings that the proposed $90 million increase in funding each year was adequate. Rupe said that’s because they relied on the state board of education’s statement.

“Luckily for the kids of Kansas, we did the math and backed up on our position,” Rupe told justices.

He proposed the Court thank the legislature and accept the legislation’s $90 dollar increase for the first year, maintain jurisdiction over the case, and instruct lawmakers on what they need to do in the future.

Justices gave little indication how they would rule on whether lawmakers’ recent school funding efforts meet constitutional muster. However, they appeared reluctant to rule and dismiss the case, as Crouse requested.

Justice Dan Biles said if the Court dismisses the lawsuit and a future legislature changes school funding before 2023 as the existing financing increases are phased in, plaintiffs will have to go back through district court to seek a remedy.  He said that’s what happened after the Montoy case, another school funding lawsuit, dismissed in 2006.

“I don’t have a lot of sympathy for dismissing this lawsuit,” Biles said. “I stood in exactly the same spot you’re standing on right now, probably on the same carpet, and made the same argument, and the Legislature reneged on the deal.”

Justices peppered Crouse with questions to determine whether the current school financing system, including the increases added during the 2019 legislative session, meet standards the Court required from the Montoy decisions. Justices repeatedly asked Crouse to set aside what the Court requested in its last Gannon decision, known as Gannon 6, and instead use a Montoy ‘safe-harbor’ basis referenced by the Legislature.

“I don’t think we can ignore what this Court said in Gannon 6, because the legislature received this Court’s order and attempted to comply with it,” Crouse said.

According to Dave Trabert, President of Kansas Policy Institute (which owns The Sentinel), today’s oral arguments were strictly about politics.

“It’s astounding and yet predictable that the Court wants to continue to ignore what they’ve said themselves,” Trabert said.

The court’s March 2014 ruling said the Shawnee County district court erred in basing it’s ruling on the Montoy findings and, based on new information, established a new test of adequacy.  Trabert says the Supreme Court therefore cannot measure its ruling now on whether funding comports with findings from the district court, which were based on Montoy.

“Even after ordered to use the new test of adequacy, the district court merely added an inflation increase to their previous Montoy-based order,” Trabert said.  “Neither Montoy nor the district court rulings in Gannon were ‘reasonably calculated’ as ordered by the Supreme Court to meet the Rose standards.”

Trabert also says the Gannon and Montoy rulings ignored the 1994 Kansas Supreme Court finding in USD 229 vs. State of Kansas, which found the constitution merely requires a system of finance, as in, a formula, and not any amount of money.