The state of Kansas paid 25 school districts more than they were legally allocated by the state legislature. Senate Majority Leader Jim Denning says they should pay it back.

Last December, a legislative post audit revealed the deputy secretary of education, Dale Dennis, authorized transportation payments to schools contrary to state law. The majority of schools that received the unlawful funding are in densely populated areas of the state. Most of the districts have money available in reserves to repay at least some of the unauthorized amounts, but Kansas Association of School Boards Executive Director Mark Tallman told the Kansas City Star forcing districts to return the money is “unjustified.”

The state paid annually between $8 million and $11.5 million in additional transportation funds to 21-28 school districts each year, according to the audit of the last five years. During the 2017-2018 school year, for example, 25 school districts received $9.7 million more than legally allocated.

Those districts are listed in the chart below along with their reported cash reserves in accounts that are not set aside for bond payments or capital outlay; that’s not to say that every dollar shown could be used for repayment, but certainly the vast majority. 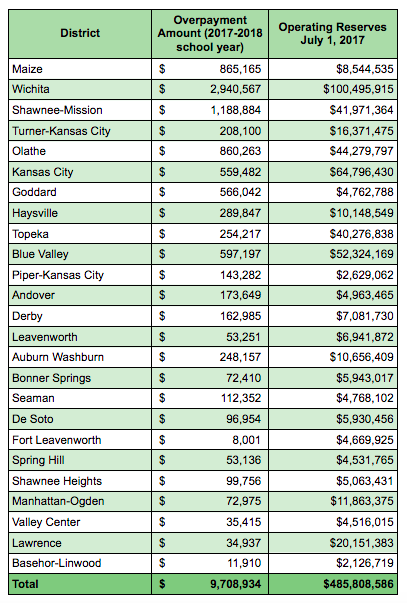