A formal public hearing before the Johnson County Charter Commission ended abruptly last night, but a handful of its 25-members stayed behind to listen to a boisterous crowd determined to address the group.

Chair Greg Musil asked the audience members to don face masks. He also asked overflow audience members to leave the room, warning that failure to comply would result in canceling the meeting. According to the posted fire code, the room occupancy of the University of Kansas Edwards conference room is 250 people. However, county officials provided only 50 chairs for the hearing. Musil said the limited seating allowed for social distancing required by the University of Kansas.

Most of the overflow audience refused to leave when asked. Several however shouted recommendations to Musil. They requested that the chair find a larger space or hold the meeting outside to accommodate the crowd. He refused and ended the meeting. County officials also shut down the live feed.

“I took off work to speak as a citizen,” Stephanie Berland told Sentinel the morning after the meeting. “I pre-registered. I wore a mask, and I have no problem with those who did not. They have a right to speak as much as I do.”

Edwards campus officials allowed the crowd to stay after Musil ran out. Six members of the commission stayed to listen. A crowd member provided a megaphone, and the remaining members worked together to listen to her concerns.

“I stayed because I was infuriated by the veiled threat by the Charter Commission Chair, Greg Musil, that if we don’t behave by wearing masks,  we will lose our right to speak and input will be denied on a Commission that comes only once every decade,” Berland said.

Former state Sen. Karin Brownlee is a member of the charter commission. She and a handful of other commissioners stayed to listen to citizens’ concerns.

“You don’t tell people to come listen and tell us what you think and then close the door on them,” Brownlee said.

Berland called the actions of the members who ran, “shameful.”

“Musil should be removed as chair and one of the five charter members that stayed should replace him,” she said.

“By staying, we dissipated a lot of the anger,” Brownlee said. “I think that is very important.”

Steve Snitz attended the meeting, though he didn’t register to speak. He said that while the event began with a boisterous and frustrated crowd, it ended as “an outpouring from the hearts of citizens who’ve been abused by government authorities and ruling against them for nearly two years.”

Brownlee believes some of the ire was misdirected at the charter commission.

The Johnson County Charter Commission meets every 10 years to review the county’s home charter and propose changes. Its 25 members are appointed from a variety of groups, including the council of mayors, local chambers of commerce, and Johnson County’s delegations to the state House and Senate. It includes appointees from each of the county commissioners, though no members of the board of commissioners sit on the charter commission.

During the last charter meeting, however, county commissioner Janae Hanzlick asked charter commissioners to consider making the sheriff’s position an appointed role rather than an elected one. Most of the speakers at last night’s meeting asked that the sheriff continue to be elected.

Brownlee suspects the issue is dead after last night’s meeting.

“No one should ever breathe that phrase again in Johnson County — the phrase, ‘non-elected sheriff,’” Brownlee said. 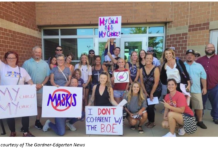