Despite it being clear the State of Kansas is using overly-sensitive COVID tests that, according to officials, will return positive results for non-contagious dead genetic material, the Kansas Department of Health and Environment is apparently unwilling to request cycle threshold data from labs to eliminate ‘false positives’ from the case count.

Director of the National Institute of Allergy and Infectious Diseases Dr. Anthony Fauci has stated that “cycle threshold” should be 34 or below.

Later in the interview, Fauci says labs initially only report ‘positive’ or ‘negative’ but they will provide the cycle threshold level upon request.

The cycle threshold is — roughly — the number of times a bit of genetic matter must be copied by the testing equipment to determine how infectious a given individual is. The higher the cycle threshold needed to identify COVID, the less infectious a person is; some virologists say results above 35 cycles are ‘false positives.’

KDHE says the cycle threshold on its most commonly used test is 42 and many private labs have thresholds set far above 35 — including Quest Diagnostics at 40 and LabCorp at 38.

“The KDHE KORA officer responded to our request for cycle threshold data, saying the labs do not provide that information to the state,” Trabert wrote in an email to KDHE Secretary Dr. Lee Norman on Nov. 2, 2020. “So we’re writing to ask if you will obtain the data from them and share it with the public.

A week later, despite a return receipt indicating that the email had been received, neither Norman nor any KDHE spokesperson has responded; the governor’s office was copied and also failed to respond.

Trabert says Dr. Norman and the Kelly administration seem more focused on closing schools and businesses and issuing mandates than on being honest with Kansans.

“We caught Norman fabricating data to justify a mask mandate.  Twice we caught Governor Kelly making false statements about COVID deaths.  The governor’s office and KDHE even refused a legislative request to see how PPE (Personal Protective Equipment) was being distributed after concern was raised that nursing homes weren’t being properly served.  They just don’t seem to care about the truth and transparency.”

The Kelly administration has routinely rejected transparency requests, as shown here and here.

As the Sentinel recently reported, Dr. Michael Mina, an assistant professor of epidemiology at both Harvard Medical School and the Harvard T.H. Chan School of Public Health, told Harvard Magazine that reporting people positive on tests with a high cycle threshold are “false positives.”

“Tests with thresholds so high may detect not just live virus but also genetic fragments, leftovers from infection that pose no particular risk,” Mina said. “Akin to finding a hair in a room long after a person has left.” 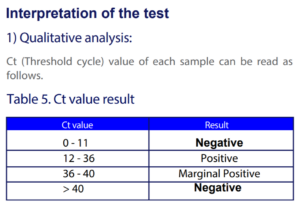 One maker of the COVID PCR test, Bioningentech, offers guidance quite similar to those in a New York Times article, which points to oversensitive tests nationwide.  Cycle thresholds between 12 and 36 are considered positive; results between 36 and 40 cycles are considered marginally positive, and anything over 40 cycles is considered negative.

Dr. Mina said he would set the figure at 30, or even less.

“Those changes would mean the amount of genetic material in a patient’s sample would have to be 100-fold to 1,000-fold that of the current standard for the test to return a positive result — at least, one worth acting on.”