Kansas City Star Washington D.C. Correspondent Bryan Lowry on Sunday sent out a tweet in the aftermath of Joe Biden overwhelmingly winning the Kansas Democratic Primary, claiming the state Republican party canceled its caucus this year.  But state GOP leaders say that’s not true, and Lowry’s action is just another of the Star’s constant, misleading attacks on Republicans. 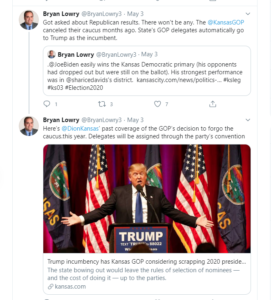 Lowry was contacted by the Sentinel after receiving complaints about the tweet, asking him to respond to statements that the Kansas GOP did not — in fact — cancel the caucus because one was never scheduled.  They debated the options and did what they’ve always done with a Republican incumbent in the White House – choose and bind delegates using the convention system.

Moreover, and also contrary to Lowry’s tweet, Kansas delegates do not “automatically” go to President Donald Trump; on May 16 the state convention will meet and vote, and that will determine to which candidate Kansas delegates will be bound.

Lowry promised to send a clarifying tweet that delegates would be assigned at the convention. He did send another tweet but he didn’t remove the false information or acknowledge his error.

His second tweet said, “Here’s @DionKansas’ past coverage of the GOP’s decision to forgo the caucus this year. Delegates will be assigned through the party’s convention.”

The Wichita Eagle (both the Star and the Eagle are owned by parent company McClatchy) story Lowry linked has the headline: “Trump incumbency has Kansas GOP considering scrapping 2020 presidential caucus.”

“The Kansas Republican Party did not cancel our caucus because we did not have one scheduled,” she said in an email. “We have never held a caucus when there has been an elected incumbent in the White House. This is nothing new, despite the media’s constant attempt to portray it as such.”

While Trump has challengers for the nomination — most notably former Massachusetts Governor William Weld — none of them are serious contenders, which the state GOP has taken into account.

“It would have made zero sense for the party to break precedent and spend hundreds of thousands of dollars to come to the inevitable conclusion that President Trump will be receiving all of our delegates in Charlotte this August,” Golden said.

It’s hardly the first shot the Star has taken at state Republicans over the caucus they insist on calling “canceled,” despite never actually having been scheduled. In a September 2019 editorial by the Star Editorial Board headlined “Kansas Republicans scrap 2020 caucus and shut out voters to protect Donald Trump,” the board stated: “The Kansas Republican Party’s decision to forgo a presidential caucus next year is more evidence that the GOP considers voters irrelevant.”

However, it’s not just the Republican party in Kansas that has taken this step in the face of a party incumbency in the presidency.

As the Star’s own Michael Ryan pointed out in September of last year, Democrats in South Carolina and Arizona passed up primaries in 1996 and 2012 when their party held the presidency. Nor is Kansas the only state to have taken the step to not waste money or time on a foregone conclusion — Alaska, South Carolina, Arizona and Nevada have all done so as well.

The question, then, is why has the Star chosen to so forcefully — and inaccurately — portray a standard process both parties follow in various states as somehow tied to protecting President Trump or disenfranchising Republican voters?