She said it more covertly than Virginia gubernatorial candidate Terry McAuliffe but the message is the same — Kansas Governor Laura Kelly believes curriculum decisions are for school officials and parents should butt out.

Kelly told the Kansas City Star she thinks the legislature “should leave curriculum issues to districts in conjunction with families.”

And then she said what she really means.

“With that said I am also a very strong believer that you hire professionals, and you elect school board members to deal with curriculum.”

In other words, ‘Butt out, parents. Government knows best.’ She tried to paper over her disdain for parents with a throwaway line about “conjunction with families” but she’s really saying is “trust the experts running our schools.”

Kelly’s disclosure was buried in an interview in which she was helping schools and the KC Star deny the obvious existence of troubling materials in Kansas public schools.  Parents see schools teaching kids that all white people are racist oppressors of people of color, encouraging gender confusion, and other divisive issues.

Like education officials, Gov. Kelly pretends that evidence of the indoctrination process doesn’t exist.  In fact, she called it a “nothing burger.”  But it’s very real.

A slide from a Blue Valley teacher training guide says people who are white, male, heterosexual, upper-middle-class, athletic, able-bodied, or neurotypical are in the Dominant Culture.  People who do not fall under one of those identities are part of the subordinate culture.

A video called Rolling in the Deep Equity exposes elements of the Deep Equity teacher and student training in Shawnee Mission.  Deep Equity’s author, Gary Howard, is seen saying, “Let’ talk about the founding of our country.  The American dilemma…the good of the many vs the wealth and power of the few.  These ideas were set in stone in 1787.”  A student who had been through the training tells the interviewer in the video, “I never really knew about social justice.  But today they gave me a definition that will stick with me for a lifetime.  The good of many rather than the greed of a few.”

The Shawnee Heights Middle School library has a considerable collection of books that many parents find to be highly objectionable.  One entitled Not My Idea includes a ‘Whiteness’ contract with a devilish figure that says whiteness gets you stolen land, stolen riches, special favors, and lets you “mess endlessly with the lives of your friends, neighbors, loved ones, and all fellow humans of color for the purpose of profit.”

Additional examples can be found here, here, and here.

It’s time to stop arguing over semantics on what it’s called and focus on the goal of the indoctrination.  Kids are being taught that the founding ideals championed by Thomas Jefferson, Abraham Lincoln, Frederick Douglass, and Dr. Rev. Martin Luther King are racist constructs so they will support it being replaced with a Marxist / socialist form of government.

Re-educating people to believe what they are told regardless of the obvious truths before them is an essential element of the transition to a Marxist/socialist mindset, and Gov. Kelly did so in her interview.  She ignores all evidence to the contrary and insists that Kansas has a “solid education system.”

No, Gov. Kelly, Kansas doesn’t have a solid education system

According to the Kansas Department of Education’s 2021 state assessment results, 47% of high school students are below grade level in math, and only 20% are on track for college and career.

The 2021 ACT results are equally dismal – only 21% of Kansas graduates are college-ready in English, Reading, Math, and Science. 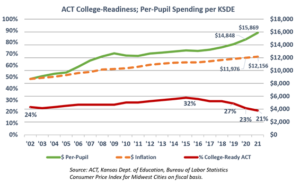 By every measurement – state assessment, ACT, and the National Assessment of Educational Progress – student achievement in Kansas is low and on a steady decline.

In no honest evaluation would parents and business owners call that a solid education system.  That doesn’t mean many of our teachers and other educational professionals haven’t dedicated their lives to Kansas kids. It does mean, however, that we must demand better of the system as a whole.

Parents deserve to have a say over what their children are taught, but they won’t get it from the existing education bureaucracy.  Superintendents and local school boards repeatedly ignore parents, and the State School Board encourages their bad behavior.

Parents, grandparents, and business owners must make legislators and candidates for state office definitively declare where they stand on money-follow-the-child legislation.  Anything other than unequivocal support is effectively condoning low student achievement and the Marxist indoctrination running rampant through Kansas schools regardless of the zip code.