Kansas ranks dead last among states and U.S. provinces in COVID vaccine distribution, according to a running tally collected by Bloomberg News, although a reporting time lag may be a contributing factor.

Kansas last updated numbers on December 23 but some states have updated as recently as December 29. In its first allotment of Pfizer and Moderna vaccines, the state received 164,900 doses. Of that, the state reported administering 3,000 doses through Dec. 23. According to the Bloomberg map below, only 0.1% of the Kansas population has been vaccinated so far with 3,000 vaccinations distributed;  Mississippi is the next lowest at 0.15%.

“These numbers are truly disappointing,” said House Majority Leader Dan Hawkins, a Wichita Republican. “It’s a shame the Kelly administration seems more focused on providing the vaccine to prisoners and elected officials instead of vulnerable Kansans who are desperately seeking a return to normalcy.”

West Virginia leads the nation in the percentage of population vaccinated. West Virginia reports administering the vaccine to 1.9% of its population, or 34,474 people, as of Dec. 29. 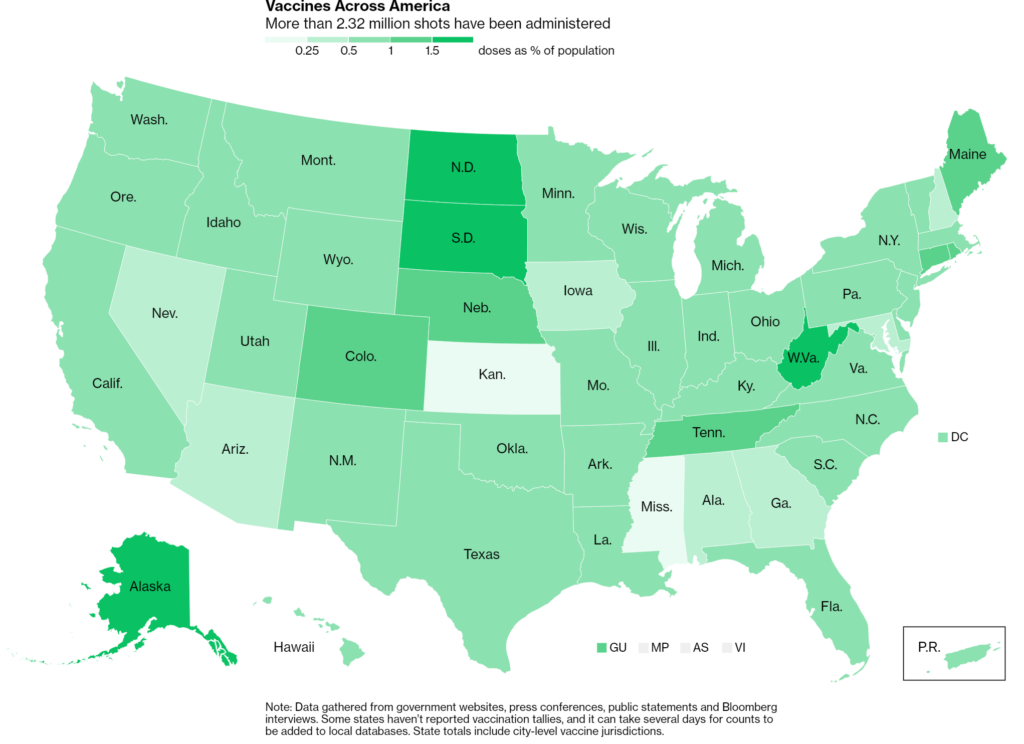 Kansas is one of 20 states that have yet to publish statewide vaccine distribution totals.

“We hope to have that soon. We’re working on getting everyone fully trained on reporting. We are currently exploring options to best convey vaccine administration in Kansas. We hope to have updates on this in the near future,” Kristi Zears, spokesperson for the Kansas Department of Health and Environment, told KMBC 9 News last week.

Bloomberg uses data from city and county sites as well as press releases and press conferences to tabulate for its running tally. According to Bloomberg’s tabulation, 2.23 million people in the U.S. have received the vaccine as of Dec. 29. U.S. officials plan to provide first inoculations to 20 million people by the end of January.

“Through this framework, my administration upholds our commitment to maximizing benefits, minimizing harm, and striving for equity, justice and fairness when it comes to when the vaccine will be made available to which Kansans,” Kelly said of the phased plan to distribute the vaccine.

Inmates jump to front of the line

On Wednesday, she told the Topeka Capital-Journal that prison inmates will receive the vaccine before it is made available to the general public.

“We do know that congregate living centers are hotspots, whether you talk about prisons, you talk about nursing homes. The only way ultimately to rid those kinds of facilities of the virus is for the vaccination to come,” she said. “It makes all sorts of sense for us to include all congregate settings in the first line of vaccines.”

The Kansas Department of Health and Environment reports 40 clusters of COVID infection in Kansas corrections facilities. The clusters include 6,132 cases and 62 deaths. KDHE reports 542 clusters in Kansas nursing homes accounting for 11,086 COVID cases and 883 deaths.