The Kansas Department of Health and Environment says all 105 Kansas counties received doses of COVID-19 vaccines, but that’s not true according to officials at the Osage County and Coffey County Health Departments.  The departments posted on Facebook today that they do not have any doses.

Coffey County posted a similar message on its Facebook page this afternoon.

“As of right now, Coffey County Health Department does not have any COVID vaccine, and KDHE has not given us a timeframe as to when we will receive it,” the post reads. “We ask for patience and guidance as we are learning new information daily. We will follow KDHE guidance of dispensing the vaccine.”

However, the Coffey Health System reported receiving and administering some vaccines on Dec. 20, apparently, without the knowledge of the local health department.

The Kelly administration is under fire for the state’s dead last ranking in vaccine distribution, as the Sentinel reported on Dec. 30.

“Vaccines have been distributed to all 105 counties and the priority is getting vaccines into arms,” KDHE tweeted Monday. “Delays reflect training needed to enter info into the federal database.” 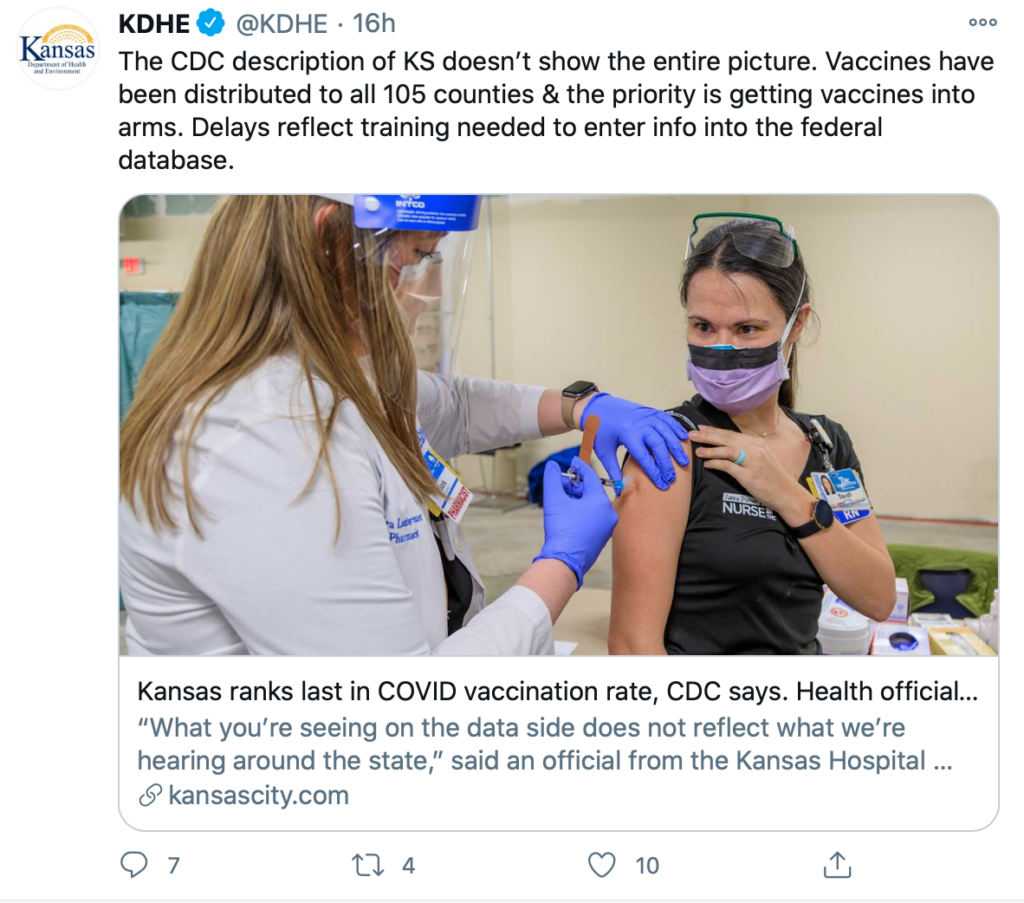 Several media outlets, including the Topeka Capital-Journal, the Kansas City Star, and WIBW, ran stories repeating KDHE’s suggestion that the state’s slow vaccination progress is due to reporting issues.

Kelly told the Topeka Capital-Journal that Kansas is successfully getting vaccines in people’s arms.

“In fact, I think Kansas has probably one of the most efficient systems set up… where we are using a hub and spoke, whereas other states are just using hub.”

The Cap-Journal interviewed Rep. Riu Xu, a Westwood Democrat, who parrots the Governor’s remarks. No Republicans are quoted in the story.

Meanwhile, Bloomberg continues to report that Kansas lags all other states in vaccine distribution. The site reports that to date, Kansas has administered 15.3 percent of the COVID-19 doses it received, the lowest number of the 50 states. Less than 1 percent of Kansans have received the vaccination.

North Dakota reportedly administered 58 percent of the shots it received, and 2.92 percent of North Dakotans are inoculated for COVID-19.

Sen. Richard Hilderbrand, a Galena Republican and chair of the Kansas Senate Health and Human Services committee, said these challenges underscore the importance of allowing local control. Local officials know best where the vaccine is needed and how to prioritize its delivery in their communities.

“Local control is especially critical with a vaccine that once you open it, you have to use it,” he said.

“Gov. Kelly talked a good game on transparency when she ran for office, but her administration has consistently failed to deliver on her campaign promises. Kansans deserve the truth when it comes to their health and safety,” he said. “Lives are at stake, and it’s time for Kansans to receive accurate information from the Kelly administration.”