Olathe parents might think that a school district falling far short of it’s “Students Prepared for Their Future” vision would be laser-focused on academics instead of pushing gender identity on students.  But the use of a controversial gender identity form is just the latest example of school administrators focusing on things other than academically preparing students for college and career.

The district’s “Gender Unicorn” questionnaire first asks students to declare their gender identity, their preferred gender expression, their sex assigned at birth (with an option other than male or female), whether they are physically attracted to women, men, or other genders, and to which gender they are emotionally attracted. 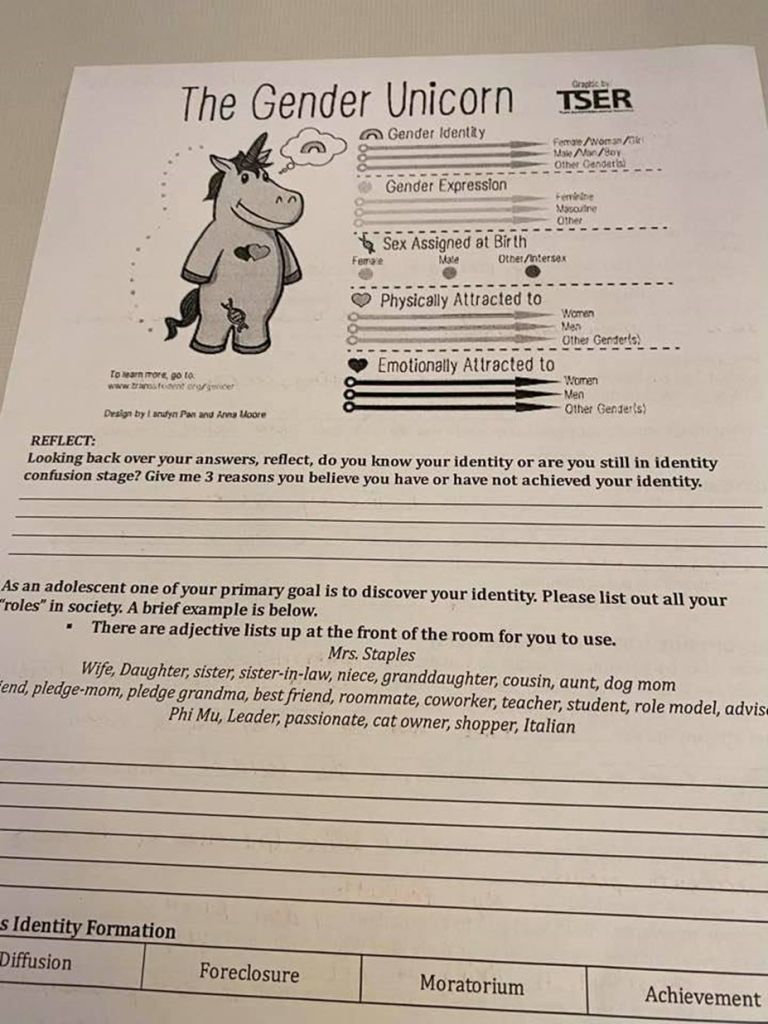 Students are then asked if they know their identity and whether they are still in “identity confusion stage.”  The district also declares that discovering one’s identity is a “primary goal” for adolescents.

Parents discussing the gender identity questionnaire on social media are furious, not just about the content but also saying they weren’t informed and given a chance to opt out.

Several parents said the Gender Unicorn issue came up last February and they were led to believe there would be no recurrence.

USD 233 Communications Manager Becky Grubaugh tells The Sentinel the district “has dealt with a similar situation in the past working to ensure it will not be used again.”

“Olathe Public Schools does not condone the use of this instructional resource and it is not part of the district’s curriculum. This worksheet was not appropriate for students and asked questions that could violate their personal privacy rights. Students who received the worksheet have been asked not to complete it. The district is working with staff to make sure this worksheet is not distributed to any other classrooms and is not used in any instruction moving forward.”

Grubaugh didn’t say how the district ‘dealt with’ the previous situation.

The Kansas Department of Education’s 2019 state assessment results show Olathe is falling far short of its vision of students being prepared for the future.

Almost a third of high school students were below grade level in math and English language arts.  Another third were at grade level but still needing remedial training to be on track for college and career, and only a third were on track.