On July 16, Hiawatha Superintendent of Schools Lonnie Moser sent a letter to parents stating unequivocally that “Critical Race Theory” is not being taught in his district.  But four days earlier, former Hiawatha educator Stuart Aller told the Board of Education that the tenets of critical race theory were indeed part of the culture under the guise of the district’s Diversity and Inclusion Council.

Aller and other members of the Brown County Liberty Alliance attended the July 12 school board meeting to express their concerns.  Aller spoke about his concerns and experience with the Diversity Council.

“I’m concerned that this council … is an indoctrination and discrimination tool,” Aller said. “We received staff and student training that places blame for societal problems on those having white skin color.”

But there was more than just training, Aller said; there was a culture that expressed the concepts of CRT among teachers.

“During lunch breaks in the teacher workroom, I routinely heard remarks about whiteness, white fragility, privilege, these buzz terms that critical race theory uses and it’s concerning,” Aller told the board. “It doesn’t provide for a welcoming or inclusive environment at all. It makes, actually, for a hostile and uncomfortable environment for those trying to live a humble and quiet life.”

Aller left the district for a private job after the 2019-2020 school year he said — in part — because of that environment.

In a phone interview recently, Aller said his opposition to the diversity council and CRT in the school district resulted in abuse on social media and a member of the Diversity Council even confronted his family.  His wife and children were walking to swim team practice when the Diversity Council member approached them and said, “your husband is crazy, and you tell him that.”

Aller said he left the district in part because he found a position where he could better support his family, but also because he didn’t agree with many of the policies and practices being put in place at the time.”

Aller also said the council was dominated by a more liberal ideology and “diversity and inclusion” do not appear to include diversity of thought, or include conservatives or Christians.

“It’s not diverse,” Aller said. “There was only one viewpoint being listened to or allowed.”

Moser didn’t share Aller’s statements with parents.  Instead, he wrote, “We want to be clear in stating that USD 415 schools do not teach critical race theory.”

Emphasis on ‘diversity instead of academics’

In his letter to parents, Moser also said, “Hiawatha Schools rightfully strive to ensure the best education and learning experience for all students so they may be successful in an increasingly diverse future.” 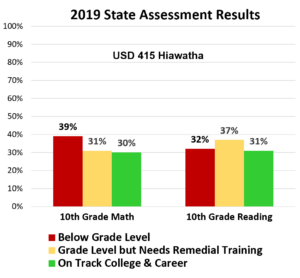 The most recent state assessment results from the Kansas Department of Education, however, show that many students are not being academically prepared in Hiawatha.  In fact, there are more high school students below grade level in the district than are on track for college and career.

Critical race theory has been making inroads in Kansas, mostly under the radar as “Diversity, Inclusion, and Equity.”

Evidence of the controversial theory being taught have been found in Olathe — resources from the Southern Poverty Law Center and the New Teacher Center were being pushed to teachers. In Shawnee Mission, more than $400,000 was spent on Deep Equity training — causing at least one parent to pull their children from the district. In Topeka teachers began being indoctrinated years ago.

Next steps in Brown County

Aller said his group will continue to work on the issue, even if board members and Moser seemed to be unimpressed with their concerns. He said they’d been given the green light to have a speaker in opposition to CRT on school grounds, but the board members he spoke with appeared to be waffling on the subject.

“We’ll see here in the coming days or this week if that’s going to happen,” he said. “They may back off of it.

Aller said with school board elections approaching it is important that the subject remain in the public eye.