While some Kansas legislators remain unwilling to address parental concern over low and declining student achievement,  the Arizona and Virginia legislatures are taking action. 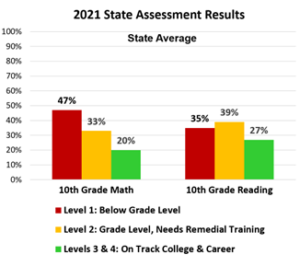 In late June the Arizona Legislature passed a groundbreaking bill that ensures all Arizona families can access school choice. Sponsored by Rep. Ben Toma, HB 2853 expands eligibility for Arizona’s Empowerment Scholarship Account (ESA) program to every family in the state.

The bill championed by the Goldwater Institute makes every Arizona student eligible for the program which currently serves only about 10,000 students.

Under the new law, families will receive over $6,500 per year per child for private school tuition, homeschooling, ‘learning pods,’ tutoring or any other kinds of educational service that would best fit their students’ needs. Any child who wishes to opt out of their public school (or who already has) would be allowed to join the ESA program under the bill.

As a 2019 Goldwater Institute policy report showed, the highest concentrations of ESA usage actually occur in the most severely economically disadvantaged communities in Arizona—meaning that the program is providing new opportunity to students who will benefit the most from it.

On July 7, 2022, Arizona governor Doug Ducey, a Republican, signed the bill, although opponents have already launched a referendum attempt that would prevent the law from going into effect until after voters have a chance to weigh in during the 2024 general election.

Virginia legislators also stepped up to give students a fighting chance.  According to the Wall Street Journal, the budget recently signed by Republican Governor Glenn Youngkin includes $100 million over the next two years to open new “lab schools” — publicly funded K-12 schools founded by public universities rather than existing school districts.  That puts them outside the state’s collective-bargaining agreement, meaning each lab school’s administrators control hiring and pay.

The hope, according to WSJ, is that the lab schools will replicate the success of charter schools in other states which — as in Kansas — face the challenge of getting permission from a local school board before they can be allowed to open.

Kansas ranks poorly across the board

The 2021 state assessment test administered by the Kansas Department of Education shows continued erosion in student achievement, with more high school students below grade level than are proficient.

Kansas also ranks 32nd in the nation for racial educational equality.  Kansas Governor Laura Kelly’s “Commission on Racial Equity and Justice” conveniently ignores what may be the state’s most egregious example of racial inequality: race-based and income-based educational discrimination.

Students of color and those from low-income families are two to three years’ worth of learning behind, and the gaps are getting worse.

Kansas also ranks 34th in the nation in the Center for Educational Reform’s “Parent Power Index,” which examines the extent to which each state and the District of Columbia have policies in place that put students ahead of systems. The Parent Power Index also “values the diversity of need and condition of every family, provides vital accessible information, and by doing so affords parents the power to exercise fundamental decisions regarding how their kids are educated.”

Kansas was one of 25 states garnering a “D” grade in the PPI, with just six states, Washington, Wyoming, North Dakota, South Dakota, Alaska, and Nebraska — which ranked fifty-first — being given “F” grades.

Florida was the only state to be given an “A” grade.

It is a situation that Kansas Policy Institute President James Franko said is untenable.

“Society, technology, and now even state policies are far outpacing Kansans when it comes to educational opportunity,” he said. “There are many dedicated folks in our public schools but it’s no longer enough to expect one-sized-fits-all schools to educate each child equally well. Someone needs to explain to kids and families why flexible options, alternative curriculum, and ultimately educational choice are good enough for kids in other states but not Kansas.”