How’s this for hypocrisy?  The final report from Kansas Governor Laura Kelly’s Commission on Racial Equity & Justice conveniently ignores what may be the state’s most egregious example of racial inequality: race-based and income-based educational discrimination. 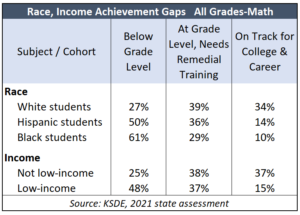 Students of color and those from low-income families are two to three years’ worth of learning behind, and the gaps are getting worse.  This social justice issue is no secret to anyone with access to student achievement data, and with both Commission co-chairs being educators, ignoring it is no accident.

Kelly appointed Dr. Tiffany Anderson, superintendent of the Topeka school district, and Dr. Shannon Portillo, Associate Dean of Academic Affairs at the University of Kansas Edwards Campus, to co-chair the Commission.  The superintendent of the Lawrence school district, Dr. Anthony Lewis, was also appointed to the Commission.  It is hard to imagine other Commission members ignoring race-based educational discrimination if those educators brought it to their attention.

Their report cites statistics about earnings gaps for people of color and blithely attributes it to “lower rates of enrollment in and completion of postsecondary degree programs.” The only rationale offered for lower enrollment is money-related, as in, students of color who graduate have much higher levels of student debt.  But maybe, just maybe, the fact that most Black and Hispanic high school students are below grade level has something to do with them not obtaining a postsecondary education.  And perhaps the fact that this is a systemic, generational problem explains why their parents are less able to afford college and career training.

The 2021 state assessment results show that White students are two to three times more likely to be on track for college and career, and the high school results are worse.  On the ACT, only 6% of Black graduates were college-ready in English, Reading, Math, and Science, compared to 25% of White students.  These deplorable results come as no surprise to educators; after all, the National Assessment of Educational Progress shows Black 4th-graders in Kansas are 2.6 years worth of learning behind White students.

So why would Governor Kelly’s Commission on Racial Equity fail to address blatant educational discrimination in the Kansas public school system?  Quite simply, doing so means admitting that a problem exists and education officials won’t follow state laws designed to close achievement gaps.  And the first commandment of Kansas politics is ‘thou shalt not criticize the public education system.’  The education system delivers a lot of votes to those who do its bidding and those who don’t feel their wrath.

A state audit examing At-Risk funding said, “most at-risk spending was used for teachers and programs for all students and did not appear to specifically address at-risk students as required by state law.”  Instead of taking corrective action, State Board of Education president Kath Busch published a commentary in the Kansas City Star that essentially said, ‘shut up, go away, we know what we’re doing.’

Another law requires local school boards to conduct annual needs assessments of each school to identify learning barriers and take corrective budgetary action.  But The Sentinel’s examination of the 25 largest districts via Open Records requests showed only two did the visits, and the achievement levels they reported were grossly inaccurate.  None of the 25 did what the law intended.

The only recommendations that the Commission report relates to achievement are things like hiring more teachers of color, making it easier for minorities to become teachers, and giving more money to districts with high-need students.  That last one should read, ‘the Legislature provided over $5 billion in incremental At-Risk funding over the years, so follow the damn law and use it as intended.’

Resolving educational discrimination starts with not allowing anything to take priority over academic improvement.  There are some excellent, dedicated educators in the system who can do the job.  But administrators and school board members must stop prioritizing the system and the adults who work in it over the academic needs of students.

Oh, and administrators and everyone else have to be honest about Kansas’s serious student achievement problem.