On Thursday, Governor Laura Kelly unveiled her plan to reopen Kansas, which won’t allow the state economy to be completely reopened until at least June 15.

Many GOP lawmakers believe it remains too restrictive and too centralized, not allowing for counties with very low — or no — COVID-19 cases to reopen fully. Kansas has been trending well below the national average in both case-count and deaths, despite spikes associated with packing plants in several counties.  As of this morning, there are still 25 counties without a single confirmed case.

“Kansans still cannot get a haircut in a salon but can crowd into a large box store with no restrictions,” the statement read. “Nearly a third of people in Sedgwick County are unemployed and still not getting through to the unemployment office.

“Business owners will use common sense when it comes to the health and safety of their customers. The Governor should have allowed all businesses to open in counties of declining cases and given local health departments the authority to mitigate outbreaks.”

Kansas Senator Richard Hilderbrand, (R-Baxter Springs), said the governor is “out of touch.”

“She needs to quit seeking advice from people that are still receiving a paycheck, and start seeking input from all of the Kansans that are not receiving a paycheck as a result of her executive orders,” Hilderbrand said in an email. “There are too many Kansans that cannot file their unemployment claims or are being told that their small businesses are not essential to Kansas and that they have to keep their businesses closed. How do you tell someone that they are not essential and are not worthy of a paycheck or that they are not worthy to keep their small business open? Everyone and every business is essential to our state.”

As of April 25, the last day for which unemployment data has been published, over 223,000 initial unemployment claims have been filed since early March.  That’s about 73 times the number of confirmed COVID cases on the same date. 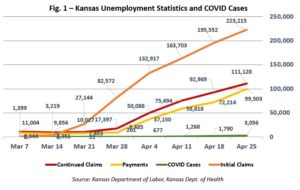 Senator Larry Alley, (R-Winfield), noted that most counties in his district have very few cases, and said businesses should be allowed to open.

“In these counties the businesses should be allowed to open,” he said via email. “People need to take precautions; if you are at risk, stay home. We need to open Kansas business up, open up main street again.  The economic impact on our barbers, hairdressers, retail stores, dentists, and doctors has been devastating.

“The order … did not open up Kansas, it did not answer the questions Kansans worry about.  When will they be able to return to normal? If you are at risk stay inside, wear PPE, and be safe; however, we can no longer afford to keep hard-working Kansans off the job.”

“Many of these Kansans do not have a penny left to their name and do not know what to do, or how they are going to feed their families. Telling small businesses that it will be the end of the month before they are able to get any help from the state, is unacceptable. She needs to understand just how much Kansans are hurting right now. She also needs to explain to those businesses that she has deemed as nonessential and ordered to be closed, how they are more of a health risk than those businesses that she has deemed worthy to stay open. 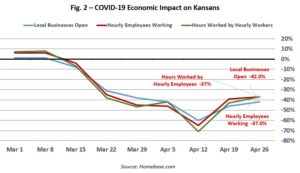 “The governor needs to remove all of her restrictions, and give the local governments the help that they need to make the decisions that are best for their citizens, and their businesses.”

Representative Mike Houser, (R-Columbus), noted the strain the shutdown has been putting on residents of rural counties and called for those counties to be reopened immediately.

“Cherokee County has seen no change in status for a couple of weeks,” he said. I understand the further restrictions as being cautious, but we need to get our economy rolling again. There is no reason the smaller cities and towns cannot go back to work. Just use common sense, wash your hands. If you think it is too early to go back , or you might be someone more susceptible to infection, then stay at home a little longer. We will get through this, but we need to get our people back to work so they can take care of their families.”

Representative Kellie Warren, (R-Leawood), decried Kelly’s apparent unwillingness to work with the legislature — and questioned Kelly’s authority to extend her declaration of emergency.

“We all want Kansans to be safe,” she said. “So on March 19th, the governor had unanimous bipartisan legislative support for the extension of her state of emergency declaration to May 1st. Since then it’s been disappointing that she has not been more inclusive of seeking legislative input in how to re-open Kansas while keeping Kansans safe.  Plus, her declared proclamation … past May 1st raises legal questions that I especially, as an attorney, have about her authority to do so.”

“She should have admitted she overreacted in March in all her lockdowns and executive orders and apologized to the citizenry,” he said. “Instead she is doubling-down on the business community once again.  I hate to say it, but Kansas is in real trouble with this crisis that Kelly has fueled.  Other governors in the Midwest have handled the same public health concerns much more intelligently, and with a more laser-focused approach.

“I don’t think her plan is based on science at all, to be frank.  The point of “bending the curve” in all the academic journals I have read is that it spreads out the number of infected persons so that your hospital system is not overwhelmed. We have done that.  Kansas has 5,000 available beds for COVID and about 200 persons currently hospitalized.

Bending the curve prevents unnecessary deaths due to lack of medical care. The same number of persons are ultimately infected either way. Kelly doesn’t get this.  She thinks if she strangles the economy long enough she will “box in” the virus and we will be “safe”.   Framing the issue like that is utter folly on her part.”