Kansas is the 32nd-worst state in the nation for racial equality, showing once again school officials’ alleged devotion to ending racism and discrimination is merely cover for a political agenda.

Wyoming ranked No. 1, with West Virginia coming in at No. 2.  New Mexico, Idaho, and Montana round out the top five.  The five worst are Wisconsin, Minnesota, Connecticut, New York, and Massachusetts.

James Franko, president of the Kansas Policy Center, which owns the Sentinel, said the scores were shameful.

“Behind each low achievement test is a child who is all-but-damned-to-failure,” Franko said. “It isn’t enough to blame ‘the system.’ Kansans should rightly feel shame for ignoring the kids behind those numbers.”

The WalletHub findings are not a one-off but part of a longstanding pattern.

Kansas Governor Laura Kelly’s “Commission on Racial Equity and Justice” conveniently ignores what may be the state’s most egregious example of racial inequality: race-based and income-based educational discrimination.

Students of color and those from low-income families are two to three years’ worth of learning behind, and the gaps are getting worse. 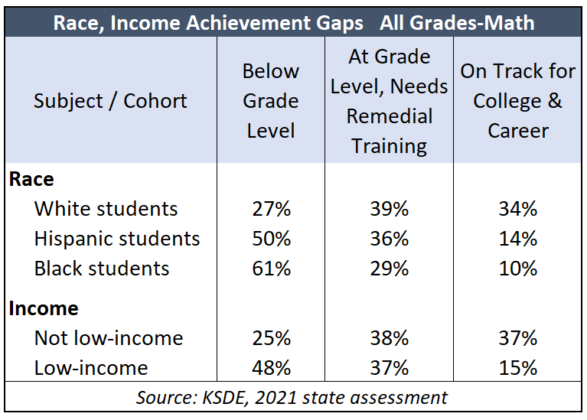 The commission’s report cites statistics about earnings gaps for people of color and blithely attributes it to “lower rates of enrollment in and completion of postsecondary degree programs.” The only rationale offered for lower enrollment is money-related, as in, students of color who graduate have much higher levels of student debt.  But maybe, just maybe, the fact that most Black and Hispanic high school students are below grade level has something to do with them not obtaining a postsecondary education.  And perhaps the fact that this is a systemic, generational problem explains why their parents are less able to afford college and career training.

The 2021 state assessment results show that White students in Kansas are two to three times more likely to be on track for college and career, and the high school results are worse.  On the ACT, only 5% of Black graduates were college-ready in English, Reading, Math, and Science, compared to 25% of White students.  These deplorable results come as no surprise to educators; after all, the National Assessment of Educational Progress shows Black 4th-graders in Kansas are 2.6 years worth of learning behind White students.

Education officials’ actions demonstrate they will not take action to resolve race-based educational discrimination.  Legislators have provided more than $5 billion in incremental funding since 2005, targeted to help at-risk students, but school officials don’t use the money as intended.  A state audit examing At-Risk funding said, “most at-risk spending was used for teachers and programs for all students and did not appear to specifically address at-risk students as required by state law.”  And instead of taking corrective action, State Board of Education president Kath Busch published a commentary in the Kansas City Star that essentially said, ‘shut up, go away, we know what we’re doing.’

Another law requires local school boards to conduct annual needs assessments of each school to identify learning barriers and take corrective budgetary action.  But The Sentinel’s examination of the 25 largest districts via Open Records requests showed only two did the visits, and the achievement levels they reported were grossly inaccurate.  None of the 25  districts did what the law intended.

Meanwhile, Olathe and Blue Valley schools bitterly opposed an open enrollment bill, ultimately signed by Kelly, which allows students to attend the public school of their choice, regardless of where they live.

Blue Valley and Olathe schools issued a joint statement, effectively saying open enrollment would force them to accept students they don’t want —  kids who are from poor families or have special needs — belying their professed devotion to diversity and inclusion.

“… we are certain to get a rush of special education students, (emphasis in original) as we already get inquiries almost daily from non-resident parents trying to enroll as both of our districts have a reputation of offering superior special education services.”

The districts went on to note that housing costs in the wealthy area help keep their districts performing at a high level.

“While we can certainly empathize with parents in lower-performing districts, both Blue Valley and Olathe are among the highest-performing districts in Kansas – indeed competing nationally – and, as such, would find our districts overwhelmed with requests from non-residents. Without intending to sound elitist, it is nonetheless true that housing costs in our districts often provide a check on resident student growth now.”

In another slap at poor people, Blue Valley and Olathe say it isn’t fair for their well-off residents to have to pay to educate kids from outside their district.

“What we believe our local districts’ taxpayers would find particularly egregious is that their taxes would be paying for non-resident students (emphasis in original), meaning the local resources for our own resident students would be spread even further. While we would receive state BASE aid for these students, the same is not true for capital outlay, bond and interest, and other weightings based on property valuations.”