Frustrated parents of Blue Valley Southwest High School students say a Diversity Club video shown in a virtual student assembly watched pushes a divisive agenda. The assembly messaged that white people are privileged and Johnson County is not a safe place for minorities, according to some parents.

The virtual assembly featured students reading famous quotes from the likes of Mother Theresa and Mahatma Gandhi. In a series of videos, two students perform an original song about diversity. Another student reads a poem she wrote about black lives matter. In another video, a student plays the mridangam, a percussion instrument popular in Indian culture. In another video, teacher Storm Shaw offers a tongue-in-cheek poetry reading  for a fictitious drug pill called “Empathica.”

“…Have you been misrepresented before and made to look like the bad guy on racial issues despite being a genuinely good person? Do I have good news for you. Try our new treatment, Empathica,” Shaw says.

He lists potential side effects including “an uncomfortable realization that your feelings of exhaustion and frustration with this issue are things people of color have dealt with for generations” and a “subtle understanding that racism in America no longer requires physical racists to be present.”

One mom called it divisive.

“It’s not something that is going to pull people together,” she said. Her student wanted to walk out of viewing the assembly.

Paul Schmidt, a parent, agreed to have his name published.

“The teachers’ approach was counterproductive to the ultimate goal of inclusion across all student populations,” Schmidt said.

In another clip, teacher Brandon Bishop provides the event’s keynote address. He singles out Republicans and Christians as lacking empathy.

“I invite you to consider who you are,” he says. “Do you make an effort to understand others that are different than you? If you’re a Christian, do you respect the beliefs of those who are not? If you identify with the Republican Party, how well do you try to understand and empathize with those who are Democrats?”

Bishop didn’t ask Democrats if they try to understand and empathize with Republicans or Libertarians, and he didn’t ask non-Christians if they respect the beliefs of Christians.

He admonishes students not to become isolated in their own worldview. And he notes that events of the past year show that racial injustice is not a thing of the past.

Schmidt has a different view. He said events of the past year, including pandemic mitigation efforts, damaged the feeling of community typical of schools. District officials limited attendance at sporting events and cancelled gatherings like 8th grade graduation.

“When a school comes together as a community, there’s no division,” he said. “But this was divisive and when that happens, a bit of community is lost. I think that’s why people are mad. We try to look for things we have in common to find unity.”

“The overwhelming sentiment was that the students who participated in the video did a great job,” she said. “Feedback about the video will be used to help inform future diversity club work to support an environment where all students, staff and families feel safe, valued and that they belong.”

“As individuals and as a nation, we have all been deeply impacted by the recent senseless killings of Ahmaud Arbery, Breonna Taylor, George Floyd and others,” it read. “These tragedies are a grim reminder of the social injustice that continues to exist in our world today…. Let us come together today as a united community to listen and learn from one another so that we can take action against systemic racism.” 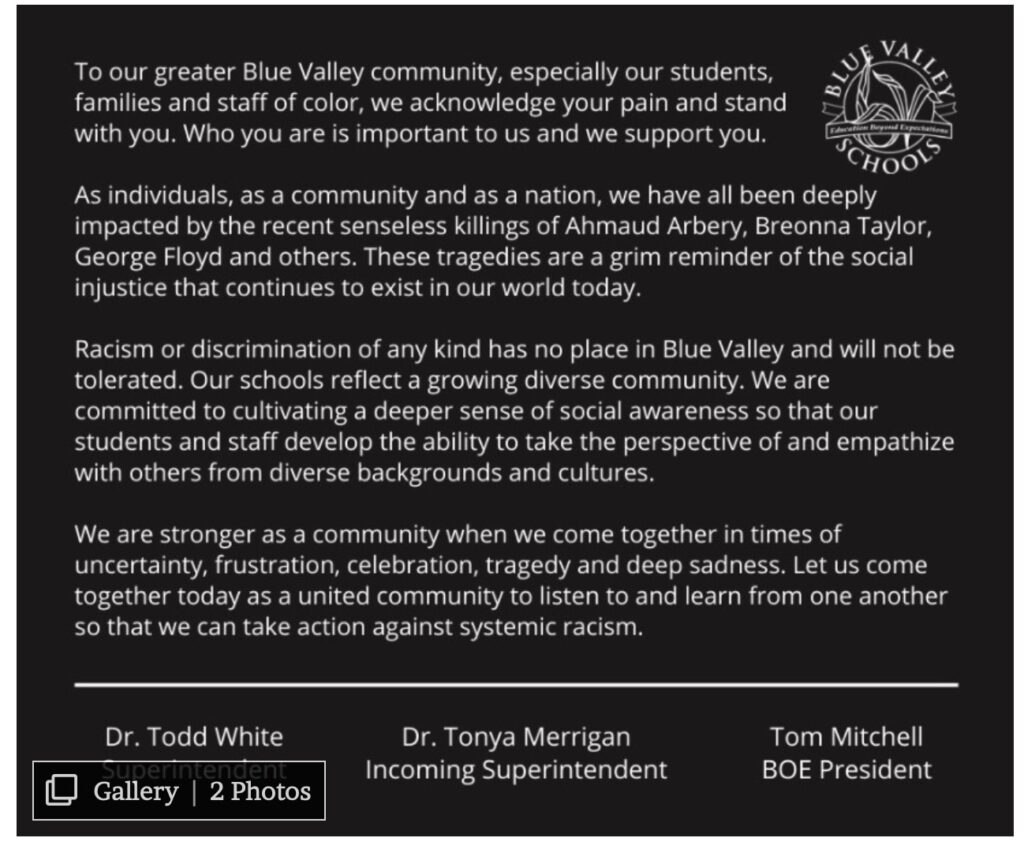 The statement, issued on social media, received thousands of replies. Many from students and former students who said they experienced racism while attending Blue Valley schools. The backlash prompted a response from the school board. The board issued a statement of its own acknowledging they read each response to the original statement.

“We have a unique opportunity and responsibility to be part of the solution in our own communities and look forward to continuing the dialogue,” the board’s statement read.

At the time, incoming superintendent Tonya Merrigan promised to develop plans to respond to unconscious bias and systemic racism in the learning environment. Merrigan created the Blue Valley Board of Education Diversity, Equity and Inclusion Committee last August. Its stated mission is to advise the district on equity and inclusion.

Six BV high school students, ten patrons, five staff members, five diverse community organization representatives, three board members and four administrators serve on the advisory board.  Some of its work this year included discussions on incorporating diversity and equity into the curriculum, training staff, and creating an anonymous injustice reporting system. The group will submit its roadmap to the school board at its regular meeting on June 14, 2021.

Kansas is #37 in GDP growth over the last three years

Fed up with 4-H focus on DEI, local group forms an alternative