In a press release just before the first of the year, Kansas Governor Laura Kelly said she’s going to “rebuild” Kansas and “reinvest” in various programs. In political-speak, ‘rebuild and reinvest’ is code for “spend and tax more,” and that’s the opposite of how Kansas voters want budget issues resolved according to a public opinion survey conducted late last year.

SurveyUSA, a widely respected polling firm, asked 519 registered voters: “The research department for the Kansas state legislature estimates that spending will exceed revenue estimates by about $600 million over the next two years, due mostly to higher school spending, and the state would be out of money the following year. That’s without giving state agencies and universities any more money, and without accounting for any new proposals like Medicaid expansion. Which one of the following best describes how you think legislators should resolve the budget deficit?” 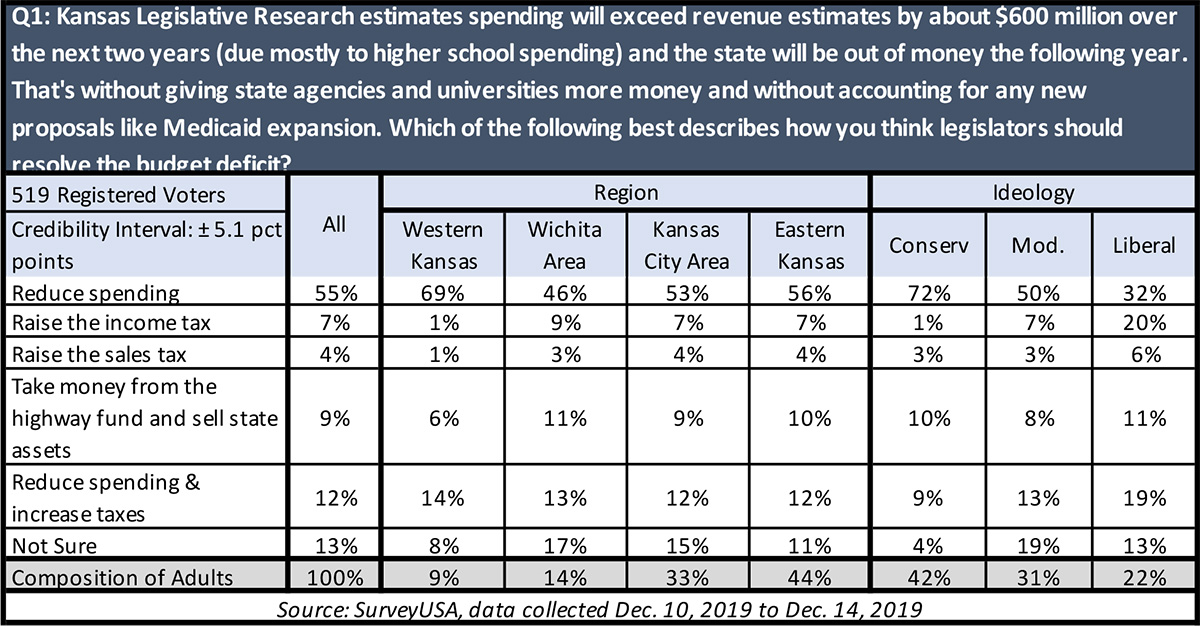 By a wide margin, Kansas residents said “cut spending.” In fact, 55% of respondents said the state should resolve the deficit by reducing spending. Just 7% suggested raising income taxes, 4% favored raising sales taxes, 9% suggested selling assets and continuing to borrow from the “Bank of KDOT,” and 12% wanted to reduce spending and raise taxes.

‘Reduce spending’ is overwhelmingly the preferred means of closing the state budget deficit across geographic regions, ranging from a low of 46% in the Wichita area to 69% in western Kansas.  Spending cuts are also the #1 response across self-described ideological lines. Conservatives have the highest preference at 72%; 50% of moderates want spending reduced and 32% of liberals.

Kelly has said that last year’s budget “paid down debt, invested in key priorities like schools, highways and health care, and provided the state with the largest ending balance in a decade — all without a tax increase, as promised.”

But that simply isn’t so. Because of changes to federal tax laws enacted by President Donald Trump, the federal deduction for state income tax was limited. A much more generous federal standard deduction also prompted some taxpayers to use that instead of itemizing, and Kansas law requires taxpayers to do the same for state purposes. Kelly vetoed legislation that would have essentially reinstated the deduction and allowed taxpayers to itemize regardless of how they filed their federal return, resulting in an effective tax increase on Kansas workers.  That was the third consecutive year Kansans were hit with an income tax hike and tax increases are the main reason that Kansas temporarily has a large ending balance.

As SurveyUSA asked: “The Kansas Department of Revenue says that Kansans may pay as much as $100 million more per year in state income tax due to how state tax law will interact with recent federal tax cuts. Should the legislature take steps to prevent this unintended tax hike from taking place?”

Seventy-four percent of respondents said “yes,” only 9% said “no,” and 17% said they were unsure.

Kelly is also pushing again this year to expand Medicaid, calling on the legislature to: “…pass a clean, effective bill to help the many Kansans who currently don’t have enough coverage.”

Once again, that’s not what the voters want.

Fifty-six percent of voters said they don’t want Medicaid expanded, and another 22 percent said they did, but wanted spending reduced to pay for it.

SurveyUSA is a leading national polling firm and was recognized for its accuracy in the 2016 elections. The poll was conducted in mid-December, and complete results and methodology are available online. The Credibility Interval varies with each question but is around 5.0%.