The Kansas Policy Institute, which owns the Sentinel, released its annual “A-F” School Grades on Monday, and the results are not good. 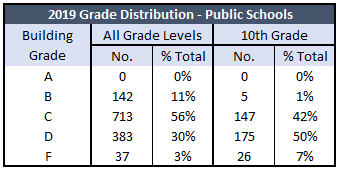 According to KPI President James Franko, the majority of the 1,275 public schools in Kansas — 56% — received a “C” grade, which means the majority of Kansas K-12 students need remedial training to be college or career ready.  No school received an “A,” only 11% of Kansas schools earned a “B,” 30% got a “D” and 37 schools received an “F.”

“A-F grading enables citizens and policymakers to understand the academic challenges to overcome as well as recognize the K-12 schools in Kansas that show achievement gains,” Franko said. “It provides an opportunity for the public to look to best practices as we all work to improve achievement.”

The “A-F” grading is a translation of state assessment scores published by the Kansas Department of Education, using their definitions and cut scores.  KSDE uses labels that aren’t easy to understand – Levels 1 through 4 – so KPI translates the scores into labels that are meaningful to parents and legislators.

This marks the first year that KPI graded the private schools that take the state assessment test and they did considerably better overall, with 48% getting a “B,” 42% 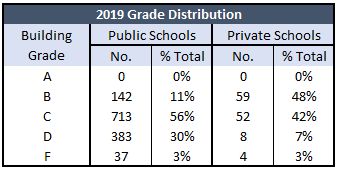 getting a “C,” just 7% earning a “D” and 3% with an “F.”   Not all private schools participate in the state assessment, however.

Per-pupil spending at the building level is also a new feature of the “A-F” report this year; the data is provided by KSDE and the amounts exclude spending on debt service, capital outlay, and Central Office administration.

The table below sampling 20 high schools shows spending was no indicator of success, as both Hays High School and Manhattan High School spent over $12,000 per student last year and both received C grades overall. Meanwhile Sumner Academy, in Kansas City, Kansas, at just under $11,000 per student achieved B ratings in math and English language arts — and notably did so with low-income students as well as other students.  Only one Johnson County high school – Olathe Northwest – earned a “B.” 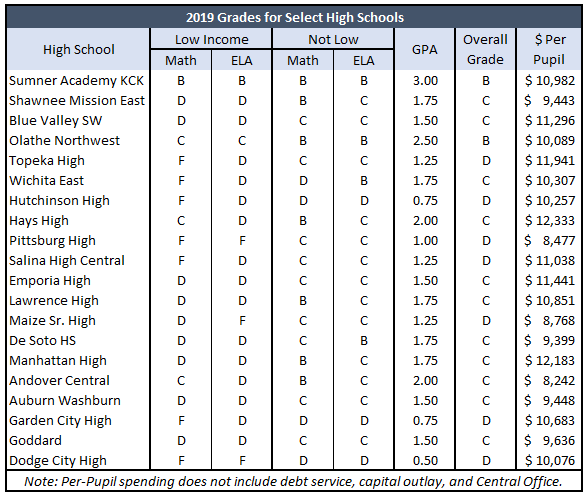 “For the first time, spending at the building level is available, which refutes the notion that spending more money is the key to getting better results,” KPI CEO Dave Trabert said in the release. “No school in Kansas received an A. It’s imperative we work to solve the student achievement crisis. I believe this may be the most important challenge facing our state. Stagnating achievement overall and staggering income-based achievement gaps between students must be addressed if kids are to find the opportunities they deserve.”

Full results, methodology, and definitions are available on a searchable database here.