While the Legislature and Governor Laura Kelly were working in a bipartisan fashion to address issues with affordable rural housing, the City of Shawnee seems bent on becoming San Francisco East.

On May 5, 2022, Kelly signed into law House Bill 2237, which provides — among other things — tax credits for certain housing projects, guarantees a portion of home loans from the state housing trust fund, thus bringing down the cost of mortgages, and provides employer tax credits for child care.

But just a few days before, the Shawnee City Council, in Johnson County, voted unanimously to make “co-living” illegal in areas of the city zoned “R-1” — specifically for single-family homes.

Co-living is a practice in which renters may share a common living area — not unlike a college dorm — but have individual bedrooms with their own locks. It is not, however, a traditional multi-family dwelling such as an apartment building or duplex where renters have separate entrances to complete housing units.

The new ordinance defines a co-living group as a group of at least four unrelated adults living together in a dwelling unit. The ordinance stated that if one adult is unrelated to another adult, then the entire group will be classified as unrelated, the Kansas City Star reports.

This has become an increasingly common practice as rents have skyrocketed across the country and people are looking to save money on housing.

Moreover, a 2022 Washington Post analysis showed rent in Johnson County has risen by 11.4% just since 2019 to an average of $1,263 — only slightly below the national average.

And, according to the same study, Shawnee is in need of 343 new housing units per year through at least 2030.

Rather than create policies to ease that burden, Shawnee city leaders have chosen a path that seems designed to exacerbate the issue.  Their action is symptomatic of a significant (and rather ironic) challenge across Kansas, says Kansas Policy Institute CEO Dave Trabert.

“Government actions like property tax increases and burdensome regulations increase the cost of housing.  Tax credits and other subsidies only exacerbate the issue by enabling bad behavior of local officials.”

To Trabert’s point, Shawnee City Council members have increased property tax by 348% since 1997.  That’s more than three times the combined rates of inflation and population change. 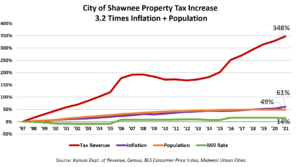 Moreover, 48% of renters in Shawnee spend more than 30% of their income on housing, while only 14% of homeowners do so, making co-living of the sort Shawnee just banned even more attractive.

While last year’s “Truth in Taxation” bill has helped to cut property taxes in 21 counties this year, Johnson County was not one of them.

Indeed, Johnson County continues to push the discredited — and illegal — “Dark Store Theory” in order to increase revenues. In 2016, the county changed its valuation methodology, which caused some retail valuations to more than double. Instead of appraising the value of the land and building as required under Kansas law, Johnson County Appraiser Paul Welcome also taxed owners on the value of the leases on their buildings.

The county has repeatedly lost rulings on the matter and admits they’re breaking the law.

Johnson County Commissioners are also preparing to hit homeowners with a property tax increase, with valuations climbing an average of 11% county-wide — and county officials refuse to say how much they will raise taxes this year.

County Commission Chair Ed Eilert told The Sentinel in March he would support a larger mill rate reduction than last year’s of 1.25%, but that still leaves most homeowners facing up to a 10% property tax hike.

Last year’s Truth in Taxation Act requires local officials to vote on the entire tax increase they impose, from changes in valuation and mill rates.  Every entity’s mill rate will be reduced so that the new valuations deliver the same dollar amount of property tax.  If elected officials want to take in more money than would be generated by that revenue-neutral rate, they must notify taxpayers of their intent and hold a public hearing before voting.

Editor’s note:  This story has been updated to clarify that the ordinance only outlaws “co-living” in areas zoned for single-family homes.