The new Kansas law aimed at increasing transparency and accountability in local government taxing and spending decisions shows some promise in holding down property tax in its first year. 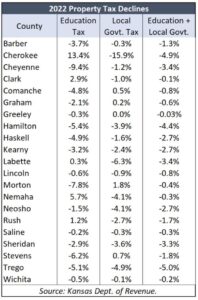 The bipartisan “Truth in Taxation” law, passed by a Republican legislature and signed into law by a Democrat governor, is delivering what it promised to many Kansas taxpayers, according to statistics by the state Department of Revenue. Taxpayers in 21 counties will see reduced property taxes earmarked for combined education and local government operations this year.

Another 47 counties had net increases under 3%.

The law requires increased property valuations to be offset by reductions in mill levies, so the same amount of revenue is delivered to local governments. If more spending is proposed, a public meeting is required, and officials must vote on the entire tax increase to be imposed. No exceptions are allowed.

The American Legislative Exchange Council (ALEC) hailed the new Kansas law upon its passage as “a bipartisan win on property taxes for Kansas taxpayers.”

“Kansas may have created the new “gold standard” model for state lawmakers throughout the country as they work to increase accountability and transparency and address escalating property tax burdens on behalf of their constituents.” 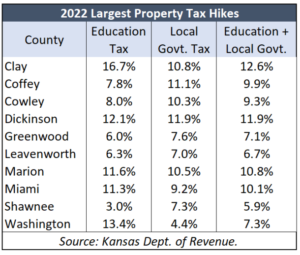 Property tax changes for each county are available at KansasOpenGov.org.