This week’s unanimous (39-0) approval of Senate Bill 294 was a huge win for taxpayers frustrated by the lack of transparency and Truth in Taxation in property tax increases.

Modeled after Truth in Taxation laws in Utah and Tennessee, SB 294 requires local elected officials to vote on the entire property tax increase they impose, regardless of whether the increase is caused by valuation changes or mill rate changes.  Each year, mill rates would be automatically reduced to a ‘revenue-neutral’ rate that produces the same property tax revenue to each city and county as they collected the year before.  If they want to raise the revenue-neutral mill rate, they must notify taxpayers of their intent and hold public Truth in Taxation hearings to accept taxpayer input.  Afterward, they must vote on the entire tax increase they decide to impose.

Senator Caryn Tyson (R-Parker), who spearheaded the property tax reform effort and is the Chair of the Senate Assessment and Taxation Committee, is optimistic that the House of Representatives will support taxpayers’ desire for transparency.

“We are legislating transparency so Kansans can see clearly what’s happening to their property valuations and taxes.  If we can get this through the House, taxpayers will be able to make their voices heard before a vote is taken to increase their property taxes.

Senator John Skubal  (R-Overland Park) carried an amendment on behalf of the Overland Park Chamber of Commerce to exempt increases from “new growth” from the calculation of the revenue-neutral rate.  Skubal’s amendment defined new growth as “The construction of any new structures or improvements on real property; real property located within added jurisdictional territory; real property that has changed in use; expiration of any abatement of property from property tax; and expiration of a tax increment financing district, rural housing incentive district, neighborhood revitalization area or any other similar property tax rebate or redirection program.”

The Sentinel asked the Overland Park Chamber of Commerce why they believed local officials should not be required to vote on the entire property tax increase.  Chamber Vice President of Public Policy & Advocacy Kevin Walker declined to directly answer the question, saying instead, “We have complete confidence in our local officials. Time and time again Overland Park city council members have demonstrated their commitment to keep property taxes low in Overland Park as evidenced by the city having the lowest mill levy of any first-class city in Kansas.”

Saying property taxes are low with reference to mill rate changes, however, gets to the heart of voter frustration with local government claiming to keep property taxes low.  The City of Overland Park, for example, increased property tax by 281% between 1997 and 2018; at the same time, population grew by 43%, and inflation was 50%.  Taxpayers might understand an increase of 93% to keep up with inflation and population but property tax jumped three times as much.  Disagreements of this nature between elected officials and taxpayers may explain why 75% of voters want local officials to vote on the entire property tax increase they impose. 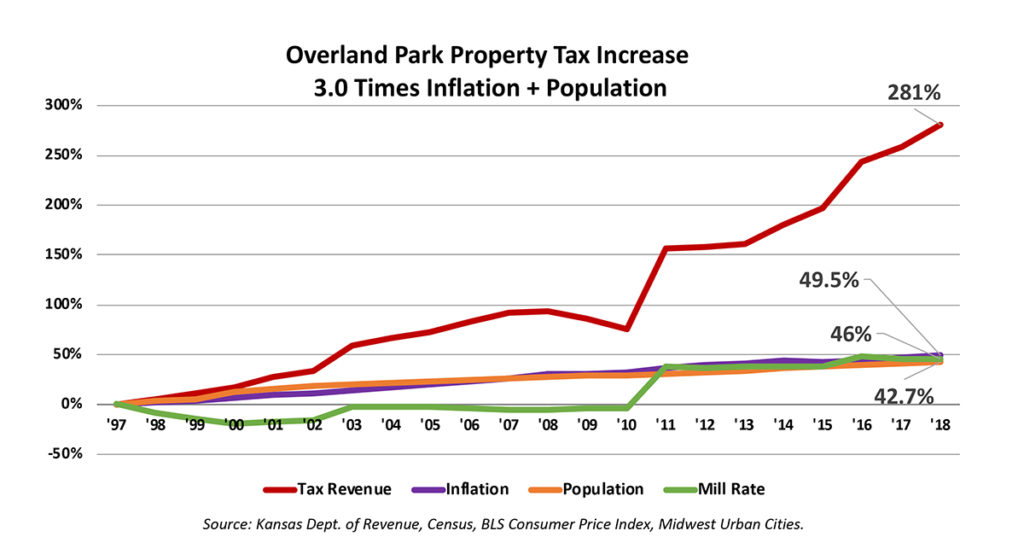 Another amendment to provide an exemption for inflation was also roundly defeated.

— SB 264 provides for the removal of someone from the county appraiser eligibility list due to termination in one or more counties.

— SB 295 prohibits a valuation increase solely as the result of normal repair, maintenance or replacement of an existing structure.

— SB 266 requires appraisal courses for county appraisers and BOTA members to be approved by the Kansas real estate appraisal board.

— SB 265 requires the state board of tax appeals to serve orders and notices by electronic means if requested by the party.

— SB 262 expands the time to request a full Board of Tax Appeals opinion to 21 days from the date mailed by BOTA.

The House of Representatives will begin debate on the property tax reform bills in March.