Johnson County officials appear to be setting their residents up for a major property tax hike this year.  Most residential appraised values are increasing by more than 10% and elected officials will not talk about reducing mill rates to keep the tax increase low. 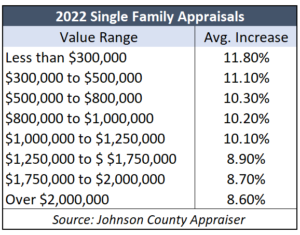 County Commission Chair Ed Eilert tells The Sentinel he will support a larger mill rate reduction than last year’s of 1.25%, but that still leaves most homeowners facing up to a 10% property tax hike.  Commissioner Charlotte O’Hara said she would support a reduction in the county mill levy, but noted that a “natural” increase is acceptable to use in the budget and “We may have to deal with the inflation component, the pressure on employee compensation is going to be enormous.”

Commissioner Janee Hanzlick responded in a manner similar to Eilert.  None of the other county commissioners responded to our request for comment.

Overland Park Mayor Curt Skoog would not say whether he supports a rate reduction to offset most, if not all, of the valuation increase, but he did signal another large hike on top of last year’s 10% increase.  Skoog says the city will follow the regular budget process, which produced a stunning 364% since 1997 — more than three the rate of inflation plus population increase. 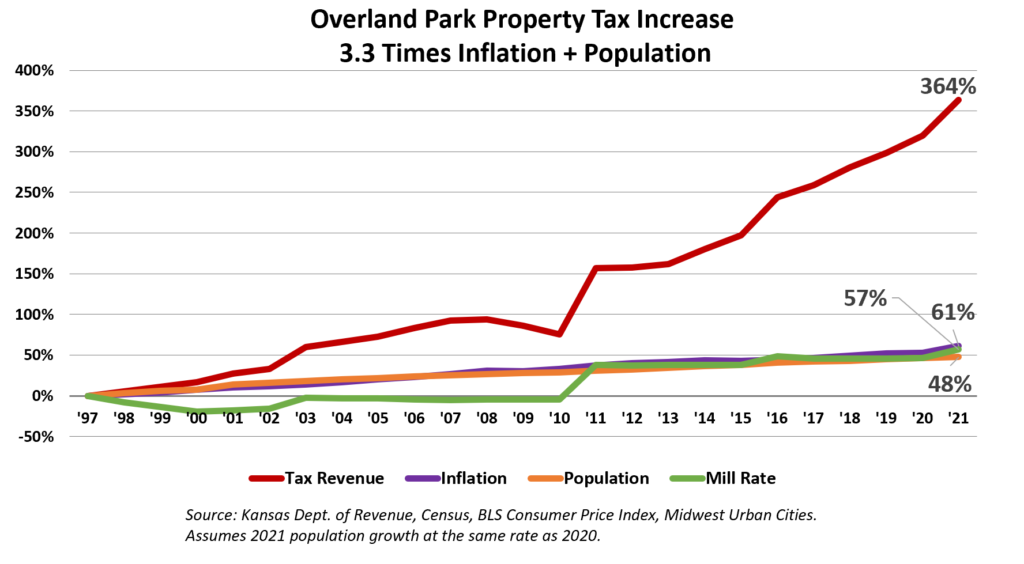 No one else on the Overland Park City Council responded.

Mayor John Bacon was the only Olathe elected official to respond, referenced the budget process, but he did not directly respond to the question.

Property tax hikes in Olathe and Johnson County are almost as bad as in Overland Park, going up 340% and 290%, respectively.

Be on the lookout for Truth in Taxation notices

Last year’s Truth in Taxation Act requires local officials to vote on the entire tax increase they impose, from changes in valuation and mill rates.  Every entity’s mill rate will be reduced so that the new valuations deliver the same dollar amount of property tax.  If elected officials want to take in more money than would be generated by that revenue-neutral rate, they must notify taxpayers of their intent and hold a public hearing before voting.

Revenue-neutral hearings must be held between August 20 and September 20, and the notices must be sent to taxpayers at least 10 days in advance of hearings.

With no local officials willing to say they will propose mill rate reductions to offset all or most of the valuation increase, residents and business owners can expect big tax hike proposals coming in the mail.