The one-day closing session of the 2020 Legislature may bring the passage of the Truth in Taxation property tax bill that has 75% voter support.

Speaker of the Kansas House of Representatives Ron Ryckman, (R-Olathe), has called the House Taxation Committee back for virtual meetings this week and Senate Bill 294, the Truth in Taxation bill that passed the Kansas Senate unanimously in late February, in on the agenda.

Modeled after Truth in Taxation laws in Utah and Tennessee, SB 294 requires local elected officials to vote on the entire property tax increase they impose, regardless of whether the increase is caused by valuation changes or mill rate changes.  Each year, mill rates would be automatically reduced to a ‘revenue-neutral’ rate that produces the same property tax revenue to each city and county as they collected the year before.  If they want to raise the revenue-neutral mill rate, they must notify taxpayers of their intent and hold public Truth in Taxation hearings to accept taxpayer input.  Afterward, they must vote on the entire tax increase they decide to impose.

House Taxation Committee Chair Steven Johnson, (R-Assaria), said that he’s heard “some word” that the house will be focusing on COVID related items, but that it would be at the top of the list of tax bills provided there is time.

“I would assume that, if we get to tax issues that would be at the top of the list,” he said.

“I will be able to suggest, but not dictate the agenda,” he said. “I would support the addition of SB 294. The overwhelming vote in the Senate would lead me to believe it could be part of the final package.” 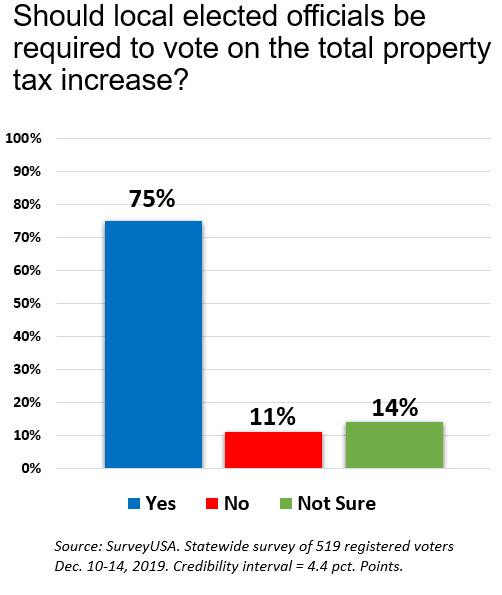 A public opinion survey conducted on behalf of Kansas Policy Institute, which owns the Sentinel, showed broad bipartisan support for SB294, with 75 percent of respondents being in favor of requiring local officials to vote on the entire property tax they impose. Johnson questioned that number but did say he would support an up-or-down vote on the Senate bill, as written.

“I don’t know about the 75 percent,” He said. “That is your number, but in terms of agreeing on voting, yes.”

In March, during testimony before Johnson’s committee, 36 counties and 13 cities, along with the League of Kansas Municipalities, the Kansas Association of Counties, and the Overland Park Chamber of Commerce submitted verbal or written testimony opposing SB 294, but Johnson said he would support the Truth in Taxation bill as written, without the addition of the sorts of loopholes that have plagued the property tax lid passed a few years ago.

“The local governments will have a chance to try to work with that,” he said, adding the Senate “did a lot of work to try and figure out a way to have some baseline control and accountability.”

Local government officials often have Democrats on their side but not in this case. Senators Tom Holland (D-Baldwin City) and Anthony Hensley (D-Topeka) led the opposition on the Senate floor to defeat exempting certain increases from the vote requirement.

Johnson said he did have one major concern with the bill, and that was timing.

“I think some real estate values will actually go down this year,” he said, saying his concern is that — should values go down with the budget already locked in, the mill rate would automatically recalculate and property taxes be bumped higher.

“I would consider, and I’ve talked to the Senate chair, I don’t want to lose the bill over it, but I would consider a 2022 implementation date if it worked better for all players, versus January 2021,” he said, adding that “it’s not it’s not worthy of getting a lot of folks stirred up about that.”

If real estate values decline much because of COVID, it would be a major departure from history according to Kansas Policy Institute CEO Dave Trabert.

“Even during a housing-bubble driven recession, residential property taxes increased every year.  Values on existing homes only dropped about 1% in 2009 and 2010, but mill rate hikes caused property taxes to jump 5.1% in 2008, and then about 3% more in 2009 and 2010.  Delaying the implementation of SB 294 would only give cities and counties a chance to hike property taxes at the worst possible time.  Local officials would love to have SB 294 delayed so they don’t have to be honest about the entire property tax increase they impose.”

Trabert says county appraisers aren’t likely to reduce home values because the recession isn’t driven by a housing crisis like it was in 2009 and 2010.  He also warns that city and county officials took advantage of the last implementation delay.

“Under different leadership in 2015, the House Taxation Committee delayed the implementation of the property tax lid in conference committee discussions, and local officials took advantage with an average 6% mill levy hike in 2016.”

Additionally, with the May 11 payment deadline for property taxes having arrived, and with much of the state out of work, Johnson says some counties have waived interest and penalties for late payment, offered a payment plan or both. However, there doesn’t seem to be statutory authority for the local governments to do so.

Kansas Senate President Susan Wagle, (R-Wichita), sent out a release on May 9, saying she has instructed the Senate Tax and Assessment Committee to meet at the Kansas Statehouse Wednesday, May 13, to address the situation.

“Requiring Kansas businesses that have been closed for weeks, and unemployed homeowners to meet the deadline for a significant property tax expense is absolutely hypocritical,” Wagle said in the release. “We cannot force economic closure and stay at home orders and still require Kansans to fund government expenses.”

She added that she wants the Senate to develop legislation to bring to Governor Laura Kelly’s desk for signature that would waive all penalties and interest for at least the next 60 days.

It was something with which Senate Tax and Assessment Committee Chair Caryn Tyson, (R-Parker) agreed.

“We looked at having the Attorney General give an opinion on what counties could do and we backed off because many counties are doing payment plans,” he said. “And depending on how you interpret it, those may or may not be authorized in statute. We don’t want to get partway there and identify that no one can do those payment plans.”

He also noted that for a conference committee to discuss an item there must be a bill passed by one house or the other, which does not currently exist and he did not feel there was an easy way to do so in the House, but that it did appear that the Senate was working on it.

He did add, that he would be happy to vote for such a bill.

Amidst all the economic angst associated with COVID, the passage of the Truth in Taxation bill might provide some welcome relief.