In testimony Monday on Truth in Taxation before the House Taxation Committee, Sedgwick County Commissioner Jim Howell urged legislators to “Pass the Bill! Pass the Bill!”  But most local government entities remain opposed to Senate Bill 294, which would require city and county officials to vote on the entire tax increase they impose.

Thirty-six counties and13 cities, along with the League of Kansas Municipalities, the Kansas Association of Counties, and the Overland Park Chamber of Commerce submitted verbal or written testimony opposing SB 294.

Cities’ and counties’ main objections related to the timing of some of the reporting requirements, the cost of giving Truth in Taxation notices to taxpayers and having to vote on tax increases from new construction; some opponents also want an exemption for inflation.

SB 294 requires local elected officials to vote on the entire property tax increase they impose, regardless of whether the increase is caused by valuation changes or mill rate changes.  Each year, mill rates would be automatically reduced to a ‘revenue-neutral’ rate that produces the same property tax revenue to each city and county as they collected the year before.  If they want to raise the revenue-neutral mill rate, they must notify taxpayers of their intent and hold public Truth in Taxation hearings to accept taxpayer input.  Afterward, they must vote on the entire tax increase they decide to impose.

Howell says Sedgwick County supports Truth in Taxation and advises other cities and counties to give taxpayers the transparency they demand.

“Some counties remain opposed to SB 294 but we’re telling them ‘this is a freight train moving fast.’ You can try to tweak it with some technical amendments, but you aren’t going to stop it.” 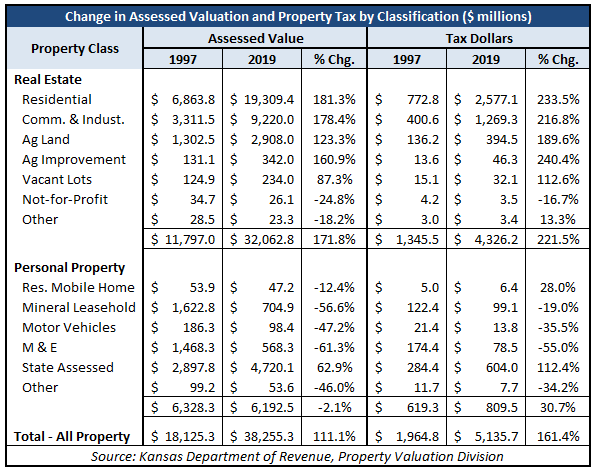 The breakout between local government, education, and state property tax by county is on KansasOpenGov.org and includes per-resident calculations for each category.

Perhaps not surprisingly, quite a few of the cities and counties that oppose the Truth in Taxation transparency measures of SB 294 have increased property taxes more than three times the combined rates of inflation and population since 1997.  Charts comparing historic changes for all counties and the 37 of the state’s largest cities are on KansasOpenGov.org.