Though it’s only been in effect for two years, local officials are finding ways around the state’s property tax lid. The lid law ties city and county budget increases to inflation, capping the amount of property tax revenue officials can raise without seeking a vote of citizens. Some officials have found ways to exploit exemptions to the 2015 law, however.

According to the Peabody Gazette, a budget consultant told Marion County Commissioners they need to decrease the mill rate to stay under the tax lid unless they reclassify some spending for emergencies, unfunded mandates or public safety, exemptions allowable by the lid law.

“Because property is assessed as being worth more, each mill levied generates more revenue without having to increase the mill rate,” the Gazette story reads. Marion County officials would need to lower its current rate by .04 mills.

Eric Meyer penned the story for the Peabody Gazette. A journalism professor at the University of Illinois and owner of the Marion County Record, Peabody Gazette-Bulletin, and Hillsboro Star-Journal, Meyer returns home to Kansas each summer to tend to his newspapers.

State lawmakers adopted the property tax lid law in 2015. It was initially set to take effect in 2018, but lawmakers amended the law in 2016 moving up its effective date to 2017. This is Meyer’s second year covering consequences of the lid law on Marion County’s budget.

He says commissioners now understand how to budget using the loopholes.

“They go through the budget and say, ‘could this be considered an unfunded mandate? Or can we put this into a special fund that we’ll call an emergency contingency fund?’” Meyer said. “They’ve become a lot more sophisticated in how they’re talking about the tax lid this year.”

Before the implementation of the tax lid, city and county officials could lower or maintain a mill levy and still rake in record revenues based on increasing property values. Homeowners and business owners would pay more in taxes, but the rate remained stagnant.

“When people consider the budget, all they care about is the tax rate that shows up on their statement,” Meyer said. “If it stays the same, then they’re happy. Really the tax lid almost institutionalizes that thinking.”

“If the Kansas Legislature does nothing to address this growing problem, then the total property tax burden on Kansas families, farmers, and small business owners will most likely double again in the next decade,” Luke Bell, the vice president of governmental affairs for the Kansas Association of Realtors, told state lawmakers in 2014.

He worried the dramatic growth in the property tax burden was stifling farmers and small business owners in Kansas.

“Furthermore, we believe that this increasing property tax burden makes it more difficult for Kansas families to make ends meet and is severely burdensome for many senior citizens and low-income Kansans living on fixed incomes,” Bell said.

Bell’s prediction about the property burden doubling in the next decade seems to be on target.  The 117 percent increase through 2013 that he referenced in his testimony has grown to 164 percent through 2018.  With inflation at 49.5 percent and population up 11 percent, the average county property tax increase is 2.7 times the combined rates of inflation and population. 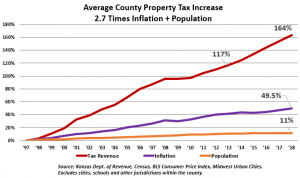 In Marion County, property tax revenues have increased by 247.9 percent in the last 22 years, marked by an 83.3 percent increase in the county mill levy rate. The levy increases and burgeoning revenue collections outpaced inflation (49.5 percent) and occurred despite a 12.9 percent dip in population over the same time period. Other counties across the state replicated Marion County’s steep revenue growth.

Because the previous year’s revenue collection sets the baseline for the following year under the lid law, it creates a disincentive for local officials to cut property taxes, Meyer says.

“The tax lid gives you an incentive to continue to spend up to the maximum,” he said.

If Marion County Commissioners, for example, cut its mill rate and its tax collections in 2019 and a need came up the following year, they would need voter approval to increase beyond inflation.

“One county commissioner says we ought to return it back to the people if we’re not going to use it, and another will warn that if you do that, then next year you won’t be able to use it,” Meyer said.

Instead, the additional revenue ends up in some kind of emergency contingency funds or reserves. Though Marion County hasn’t adopted a budget yet, the commission chair and the commission’s budget consultant recommended keeping at least six months’ worth of revenue in reserves to handle unexpected expenses or future valuation changes, the Peabody Gazette reported. The chair also warned that “the assessment boos might be temporary and could be reversed by declining values in agricultural land and vacant business…”

Meyer says one of the county’s most significant needs might not be met next year, in part, due to the lid law.

“We’ve got a lot of road problems in this county, and instead of adding more budget for roads and more gravel, they’re going to put the money into the emergency fund,” he said.

That ‘spend it or lose it’ argument against requiring voters to approve property tax increases is not uncommon, but the law was prompted by voter outrage over excessive tax and spending increases in the past.

County clerks are set to report assessed valuations to the state by July 15.