The rapidly growing backlash against critical race theory yesterday prompted the Kansas Department of Education (KSDE) to deny that CRT is included in curriculum standards.  Commissioner Randy Watson said the K-thru-12 history, government, and social studies standards have “never, ever included Critical Race Theory, nor does it today.”

Education officials and lobbyists are notorious for consciously deceiving Kansans, and Watson’s carefully worded statement is just the latest example.

Claiming that critical race theory isn’t included in standards does not mean that CRT isn’t being used in classrooms or teacher training.  Being in standards and being in schools are two entirely different subjects, and every education official knows the difference.

Parents know what their children are being told and there is plenty of evidence documenting the use of CRT and its code name – diversity, equity, and inclusion.

For example, the Shawnee Mission school district spent $400,000 on Deep Equity training, which is based on critical race theory.  Deep Equity is based on the work of Gary Howard, who believes White people “are collectively bound and unavoidably complicit in the arrangements of dominance that have systematically favored our racial group over others.”  Howard – and by extension, the schools that use it – are effectively saying White people are racist simply because they are White.

The premise of Deep Equity is that student achievement is suppressed by White privilege.  The vendor that sells Deep Equity indoctrination says, “The dynamics of privilege and power must be confronted to impact real change” and “students’ cultural realities and experiences must be at the center of the teaching and learning process.”

Shawnee Mission’s diversity coordinator, Dr. Tyrone Bates, wouldn’t answer a simple question from the Sentinel, asking whether the district uses critical race theory in classrooms or for teacher training.  He had the district’s PR director spin a reply on his behalf.

Here’s another one.  Blue Valley showed students a video in which teachers criticized Whites, Christians, and Republicans for not listening to and being understanding of other viewpoints.  No other groups were singled out; just those considered oppressors in the minds of CRT enthusiasts.

Asked to comment on the propriety of targeting Whites, Christians, and Republicans, district officials said they were proud of the work that went into the video.

Education officials have a longstanding tradition of deception

Consciously deceiving parents and legislators is a longstanding tradition of the Kansas education community.

For years, education officials insisted that funding was only about $4,000 per student even though their own budget reports showed funding was more than double that amount.

When the Sentinel’s owner, Kansas Policy Institute, discovered that districts had about $700 million in operating cash reserves, some superintendents said, ‘we don’t have any reserves.’  Others said, ‘well, we had reserves, but we spent it all.’  Still others said, ‘we have reserves but we aren’t allowed to spend them.’  By the way, those operating reserves are now almost $1 billion. 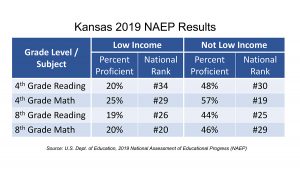 The Kansas Association of School Boards perennially says Kansas is among the top ten states in the nation – a claim that has never been close to true.

The National Assessment of Educational Progress – the Nation’s Report Card – has often put Kansas at about average, and now the state is below average.  National rankings on the 2019 NAEP (the most recent) range from a best of #19 (4th-Grade Math for students who aren’t low­-income) to #34 (4th-Grade Reading for low-income students.

The 2020 ACT rankings for White students, Black Students, and Hispanic students are each in the low 30s and only 23% of Kansas graduates were considered college-ready in English, Reading, Math, and Science.

Deception flows even when under oath.  Former Kansas City Superintendent Cynthia Lane testified in court that lack of funding was the reason that many of the district’s students weren’t adequately prepared for college and career, but she was on record months before placing the blame elsewhere, Lane wrote in a district newsletter, “The Kansas assessment is not rigorous enough to guarantee that our students are on-track with where they need to be.”

On another occasion, Lane told the court that money from a federal grant was the difference-maker in student achievement at USD 500’s Emerson Elementary.  But she deliberately didn’t mention that the district first fired most of the Emerson staff upon learning that they didn’t believe their students were capable of learning.  Lane also failed to report that Northwest Middle School also received a federal grant, but there was no improvement in student achievement.

Kansans have learned they cannot take anything education officials say at face value.  That’s sad, but it is reality.  Wide deployment of the elements of critical race theory in Kansas schools is also a reality. 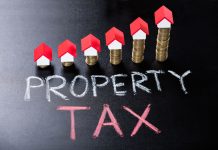 Prairie Village officials cause housing to be less affordable