Stand Up Blue Valley likes to portray its leaders as “concerned parents” but their actions show they exist to support an entrenched bureaucracy that perpetuates educational mediocrity.

This week they are listing the qualifications they demand in school board candidates, and their priorities should set off alarms with parents and everyone else in the community.

Take a close look at their top three qualifications to be board members and see if you can spot what is missing.  Here is a hint – students and student achievement are glaringly absent.

Qualification #1 – Understand how a school board works. SUBV says board members are there to “guide and oversee more than to micromanage.”  That is code for ‘you are there to support the administration, not ask pesky questions about meeting students’ needs.’

Qualification #2 – Understand how schools are funded and not make false or misleading claims about school funding.  This one is a contender for the Most Hypocritical award, as there is rarely a funding claim from the SUBV propagandists that is accurate and not misleading.

True to form, their explanation of this qualification has some false and misleading claims.  SUBV says operating funds only come from what is allocated by the Legislature, but Blue Valley’s budget for this year includes $46.3 million in Supplemental General Local Option Budget funding, $7.1 million in Cost of Living funding, and $2.4 million in Extraordinary Growth funding.  This all represents property tax that the school board, not the Legislature, chooses to impose to use for operating purposes and the money can be used however the school board desires.

Here’s another one.  They at least imply that money for more teachers cannot become available without raising taxes, which is absurd.  The school board could make about $7 million available to hire teachers by reducing administrative bloat.  At Shawnee Mission’s student to manager ratio, Blue Valley would have 66 fewer administrators.  This is just one of many examples.

SUBV also says additional debt would have to be issued to add more classrooms by modifying existing space.  They neglect to mention that the district started the last school year with almost $52 million sitting in Capital Outlay reserves, which can be used for that purpose.

Qualification #3 – understand and appreciate the nonpartisan nature of the board.  In other words, board members may not have an opinion that differs from the majority.  Remember Qualification #1; you are there to be a cheerleader for the status quo.

Political party affiliation is one form of partisanship but there are many others, like the SUBV ideology of putting the needs of adults ahead of student needs. 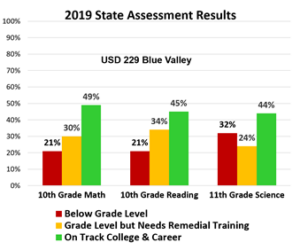 Stand Up Blue Valley is terrified that parents might learn the truth about student achievement in Blue Valley because it is much lower than the bureaucracy has led parents to believe.

According to the Kansas Department of Education’s 2019 state assessment, one out of five high school students are below grade level in math and English language arts.  One in three are below grade level in science and less than half are on track for college and career in each subject.  Roughly a third of high school students are at grade level but still need remedial training to be on track for college and career.

It’s painfully obvious that Stand Up Blue Valley must be satisfied with these disturbing student outcomes, which have been declining for years.  Otherwise, they might make ‘Willing to take bold steps to improve student achievement’ their #1 Qualification. 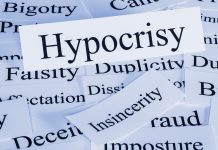 Hypocritical hissy fits from SUBV, Game On over 1776 Project endorsements