Johnson County is ground zero in the “dark store theory” controversy, an ongoing legal and legislative debate about how commercial real estate is assessed. Johnson County changed its valuation methodology for 2016, causing some retail valuations to more than double. Last week’s BOTA decision marks another victory for big box stores, according to one of Walmart’s real estate tax attorneys, Linda Terrill.

“They’ve never won,” Terrill says of the county assessors, though she believes Kansas counties will continue to appeal decisions of the tax appeals board until appeals run out.

The adjacent table comes from data submitted by Terrill in testimony to the Senate Taxation Committee; the 25 stores listed collectively were hit with a 107% valuation increase in 2016, and that was after a 12% hike in 2015. 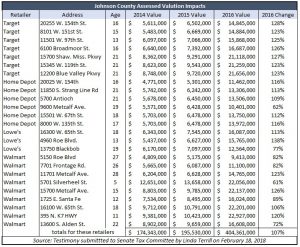 Assessed values for the 57 Johnson County big box stores larger than 40,000-square-feet increased from more than $400 million in 2015 to $742 million in 2016, an 85 percent increase in a single year. The 10 Walmarts in Johnson County saw their valuations jump from $10 million to $22 million in a single year. Every big box store in the county filed a property tax appeal in 2016, Terrill told a Senate committee in February of 2018.

Retailers have amassed a winning streak in the Kansas Board of Tax Appeals, Terrill said.

In other states, retailers haven’t been as successful. In Michigan, for instance, the Supreme Court refused to hear a Menard’s tax assessment case, allowing to stand a 2016 ruling in favor of a Michigan city’s tax assessment process.

‘Dark Store Theory’ is a phrase coined by government officials, referring to setting commercial property values based on the building and land.  Ironically, that’s the way big-box retailers have been valued all along.  Now the county also wants to tax intangible value attributable to a lease in place and business value. In other words, Johnson County officials applied an ominous-sounding label to generally accepted appraisal practices to provide cover for what they were doing.  They want residents to believe retailers are asking for special treatment with ‘tax reductions;’ in reality, those retailers are trying to hold county appraisers to existing law and appealing what they believe to be large, improper tax increases.

Johnson County Commission Chair Ed Eilert opposes the approach to commercial property valuation that only considers the structure and land. He told the Shawnee Mission School Board in 2018 that that only values the walls and ceiling of a commercial building.

“Even though the property has thousands of people going in and out of the store every day, and they’re doing tens of millions or maybe a hundred million dollars in sales every year. The theory that’s been advanced is that the value of that property is that it’s empty,” Eilert said.

Terrill refutes Eilert’s characterization, and apparently, the Board of Tax Appeals does as well.

Terrill likens Eilert’s argument to setting residential values based on a homeowner’s income.  She recently told the Kansas City Star, “If you win the lottery on Monday, your house isn’t suddenly worth more on Tuesday,” Terrill said. “And if you file bankruptcy on Wednesday, your house is still worth exactly the same thing.”

County officials are warning that losing these appeals would cost government millions of dollars, but that’s misleading on two fronts.  First, the claim is based on not getting to keep 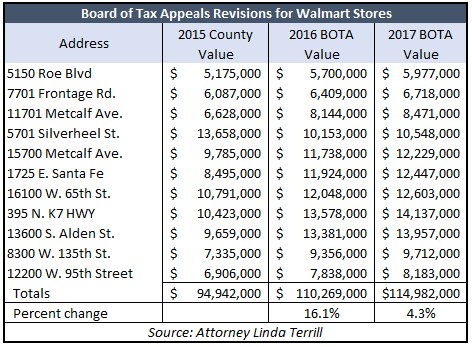 money they improperly took.  Also, government claims of losing money often mean taxes are going up, but not as much it wants. That’s the case with the Walmart stores in this recent ruling.

The Board of Tax Appeals allowed a collective 16.1% valuation increase for 2016 and another 4.3% for 2017.  These Walmart stores will be paying a lot more tax than in 2015 (when values also increased)

As retailers and county assessors battle it out in court, government officials and advocates are likely to continue the fight in the Kansas Legislature. Legislative action helped start the spike in commercial property valuations, according to Terrill.

In 2015, lawmakers adopted a property tax lid, limiting the ability of county and city officials to increase property tax rates beyond inflation without voter approval. But legislators gave cities and counties three years to prepare, and many used that time to implement large tax hikes to set a new ‘floor’ for comparison to the voting requirement.  Johnson County, for example, imposed a 17% increase in 2015 and another 7% in 2016. 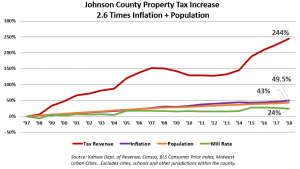 Advocacy groups like the Kansas League of Municipalities seek to have the tax lid repealed, but they also advocate for commercial assessments that value income–and not just resale value– in determining a property’s value.

“I’m sure as night follows day in Kansas, those governmental entities that are so heavily dependent on property taxes will, if they can’t get judicial relief, they’ll seek legislative relief to protect their revenues,” says Johnson County commissioner Michael Ashcraft.

Meanwhile, bureaucracy allies in the media are fear-mongering and threatening that elected officials will be forced to replace shrinking commercial property tax collections by increasing taxes on homeowners.

“If the bureaucracy can’t get relief from the legislature, there will be a lot of pressure to raise taxes on mom and pop homeowners,” Ashcraft says. “That’s just the inevitable push of the bureaucracy to continue to feed its demand for resources.”

Alan Cobb, president of the Kansas Chamber, says taxpayers should be wary.

“What strikes me is literally you have tax consumers who invented a new way to appraise property,” Cobb says. “And well beyond any kind of industry, national, widely-accepted norms. They just invented this to get money. If they invented this, they’re going to invent something else. It should be a concern to any taxpayer in Kansas.”

Ashcraft says officials will figure out a way to spend every dime they collect and ask for more.

“We spend money blithely year over year,” he says. “The governmental philosophy. That’s the mindset. It’s rough and it just drives me nuts.”

He points to bloat in the under construction county courthouse as an example.

“The one thing that pops into my mind, and I know I’m going to sound like a broken record–it’s the rainbow chandelier going into the new courthouse. It will be colorful. It will be pretty,” he said. “And it will be $500,000.”