“If we went with revenue-neutral, the only thing we could do then is defund the police.”

Preisinger made the bizarre statement at about the 14-minute mark of this video but Mayor Nancy Bauder and the other commissioners apparently agree with him.  They made no comment on his ‘defund the police’ claim.

Of course, defunding police or cutting some other essential service is how some local officials threaten taxpayers; either go along with another tax hike or they will make you suffer.

The city’s budget summary shows about a $355,000 property tax increase, and the commissioners and the mayor had a lot of options to avoid doing that.  The budget book oddly does not provide line-item comparisons of this year’s estimated spending and next year’s proposed budget, but they propose a $5.4 million increase over this year’s estimated total General Fund spending.  That’s a 27% increase.

Transfers are not itemized for the General Fund – that is another of many transparency issues in Leavenworth’s budget – so it is possible that a change in transfer payments could account for part of the increase.  But there are many large spending increases over 2020 actual spending that provide commissioners with opportunities to avoid a property tax increase. 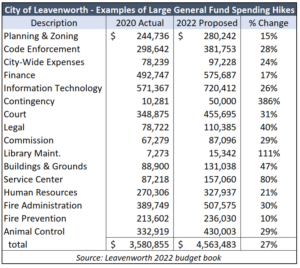 in 2020.  Here are some other examples of what commissioners apparently believe is more important than holding property tax flat:

Spending on police administration, dispatch, and operations is only increasing 11% over two years, which indicates commissioners can control costs if they so desire.

To put Commissioner Preisinger’s ‘defund police’ comment in perspective, commissioners could take the entire $355,000 property tax increase out of these General Fund cost centers and there would still be an 18% collective spending hike in those departments.

By the way, The Sentinel tried to get more information from Finance Director Ruby Maline but our calls and emails were not returned.

Leavenworth City Commissioners simply want taxpayers to cut back on their discretionary spending rather than make department managers sharpen their pencils.

The least they could do is, to be honest with taxpayers.  Instead, they insult taxpayers’ intelligence and threaten to defund police to justify an unnecessary property tax hike. 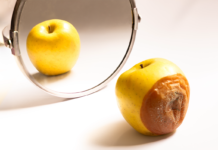