Updates of deaths attributed to COVID are based on when deaths are reported by health departments with considerable time lag from when the deaths occurred, but that didn’t stop CNN from falsely declaring “December has been the nation’s deadliest month since the COVID-19 pandemic’s start.”

Kansas City TV station KMBC posted the CNN story, even though the Sentinel has repeatedly caught media and Governor Kelly implying that the dates deaths occurred is the same as when reported.

The day after the Sentinel exposed Kelly’s first false claim, KDHE Secretary was careful to point out new deaths reported that day included deaths from “reconciling” reports from previous months.

But CNN and KMBC continue to push the false narrative to scare people. 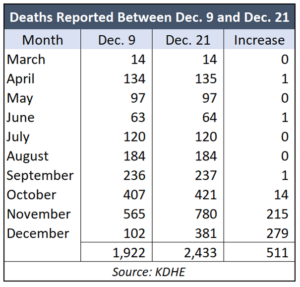 Last week we reported that on December 9, the death graph on the KDHE site showed 1,922 deaths, including 407 listed in October and 565 in November.  But by December 21, KDHE had added 14 more deaths to the October tally and 215 more to November; they also added one more death to April, June, and September.

CNN goes on to say, in typically apocalyptic fashion: “The grim death toll comes on the heels of several brutal months for the U.S., with COVID-19 ravaging communities from coast to coast, crippling hospital systems and prompting new widespread restrictions. The authorization of two COVID-19 vaccines earlier in December offered some hope of a light at the end of the tunnel, but experts continue to warn that while the end is in sight, the pandemic is not over and another surge stemming from Christmas travel and gatherings could be on its way.”

‘Another’ surge likely references the predicted Thanksgiving “surge” that was more of a bump, with many states reporting either localized increase or no surge at all.

ED visits trended sharply upward beginning late November the last two years but this year, visits for COVID-like and flu-like symptoms are lower than last year and trending down. 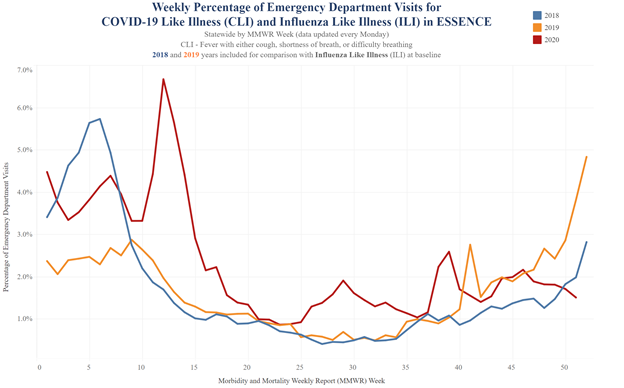 Moreover, on Dec. 22, Democrat Kansas Governor Laura Kelly announced that the virus was “under control” in Kansas with a retransmission rate below one.

According to Kansas Department of Health and Environment Secretary Dr. Lee Norman, the Rt, or “reproductive factor” of the virus has been trending down in Kansas and has fallen below one. Rt is a key measure of how fast the virus is spreading, it’s the average number of people infected by someone with the virus. Above 1.0 the virus will spread quickly, below that and the virus eventually will stop spreading.

Moreover, there’s no guarantee that the number of deaths being attributed to COVID in Kansas — or indeed nationwide — are being accurately attributed.

The same problem turned up in Minnesota.

According to the Washington Examiner, after reviewing death certificates, Minnesota lawmakers found as many as 40% of COVID-19 deaths — weren’t.

“State Rep. Mary Franson and state Sen. Scott Jensen released a video last week revealing that after reviewing thousands of death certificates in the state, 40% did not have COVID-19 as the underlying cause of death,” the Examiner reported. “I have other examples where COVID isn’t the underlying cause of death, where we have a fall. Another example is we have a freshwater drowning. We have dementia. We have a stroke and multiorgan failure,” Franson said in the video.

“She added that in one case, a person who was ejected from a car was ‘counted as a COVID death’ because the virus was in his system.

KPI submitted a Kansas Open Records Act request to the Kansas Department of Health and Environment last week to obtain the same sort of death certificate information used in Minnesota and the State of Washington; a week later, KDHE has not indicated if they will comply.