Even though there wasn’t a Thanksgiving surge, Dr. Lee Norman, Kansas Secretary of Health and Environment, warned Kansans to avoid gathering over the Christmas holiday. Instead, he recommended hosting a Christmas meal solely for individuals who reside in a single household, preparing traditional Christmas recipes and delivering them to friends and neighbors without contact, or hosting a virtual dinner.

He offered similar advice for the Thanksgiving holiday, coupled with dire warnings of an anticipated surge in COVID cases. Media repeated those warnings in the days leading up to Thanksgiving and followed up with stories about a Thanksgiving surge of cases.

On Dec. 3, KMBC-TV reported a “COVID-19 surge is possible because of travel over Thanksgiving.

“Hospitalizations were lower seemingly from the holidays, but appear to be climbing back up now. And hospitals like KUMC are preparing for the surge,” Johnson County Health Director Dr. Sanmi Areola told the Post.

Infections at the time, nearly a week after Thanksgiving, trended down, but health officials quoted in the Shawnee Post blamed a lack of testing.

“We expected a big surge after Thanksgiving. It didn’t happen,” Kelly told reporters.

“We didn’t see the surge we worried about over the Thanksgiving holiday,” Norman agreed.

“Based on effective reproduction rate, we know that successful implementation of the unified testing strategy has led to control of the spread of the virus in Kansas for the first time since the stay-at-home order was lifted in May,” Kelly said at a Tuesday press conference.

Norman said the state uses data from John Hopkins University to determine Kansas’s r-naught rate. However, another popular COVID tracking site, Rt.live, reports that Tuesday didn’t mark the first time the state’s COVID reproduction rate dipped below 1. Kansas dipped to 1 on Nov. 15 and then dropped to .99 on Nov. 16. It’s stayed below 1 ever since.

When Kansas officials initiated the stay-at-home orders on March 30, the state’s rt rate was 1.29. It dropped below 1 to .98 on April 24, and bottomed out on May 7, a few days after the Kelly’s shelter-in-place orders expired on May 3. The r-naught peaked on June 8 and remained at 1.17 until June 16. The reproductive rate hovered around 1 through the rest of the summer, and started climbing again in September. Kansas’s effective reproductive rate peaked again in mid-October at 1.17. It’s been steadily dropping since that time. 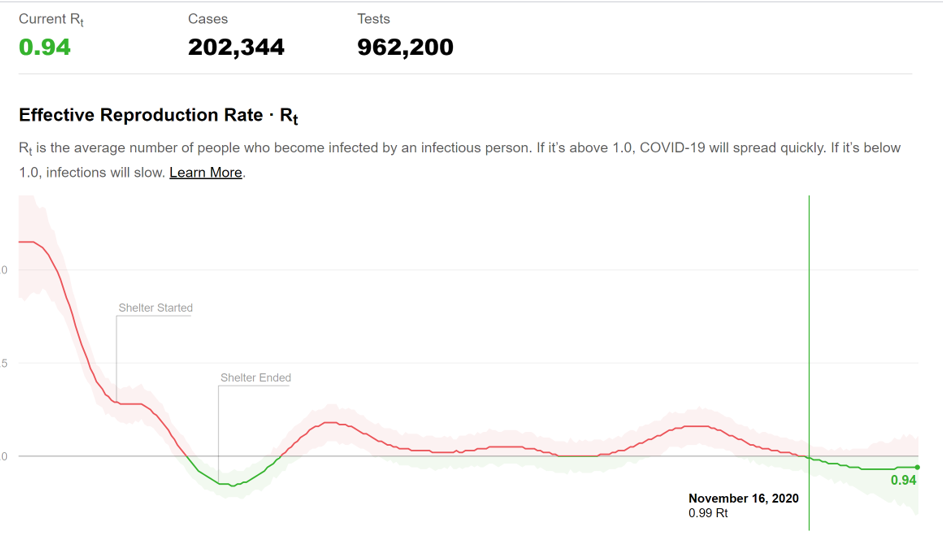 Since the r-naught rate is below 1, a post-Thanksgiving surge never materialized. The somber headlines and reporting remain and most, without correction.

To its credit, the Eagle did add a correction to one story on the non-existent surge in Sedgwick County. That correction reads, “Based on faulty information from Sedgwick County, an earlier version of this story said the week after Thanksgiving was the worst of the coronavirus pandemic, which was incorrect. The story has been updated to reflect the county’s corrected numbers.”