USD 500 superintendent Cynthia Lane collected a number of laurels from the education lobby during her years while leading what is arguably the worst-performing school district in Kansas, and now she can add another one.  She is the pension spiking queen!

Data published on KansasOpenGov by Kansas Policy Institute shows Lane was paid a whopping $458,200 in her final year as superintendent of USD 500 Kansas City.  Lane collected $232,646 the previous year and a district spokesperson told KPI the increase this year was due to payout of unused sick leave and vacation days upon her retirement.

Unlike the typical private sector employer, local school boards allow employees to be paid for unused sick leave accumulated over many years, and Kansas legislators allow government retirees (hired by 1993) to use the windfall to dramatically increase their pensions in a practice known as ‘spiking.’  Some back-of-the-envelope calculations show Cynthia Lane’s golden parachute could add more than $550,000 to the first twenty years of her pension.  Here’s how the math works. 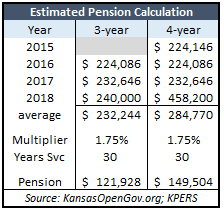 A pension of almost $150,000 per year that’s largely exempt from state income tax (that’s another government perk) is a pretty health reward for leading what is probably the worst-performing school districts in Kansas.

Kansas Policy Institute’s “A-F Grading” project translates state assessment scores into letter grades, and 80 percent of the grades for USD 500 Kansas City are Ds and Fs.  Another inner city district with high poverty levels, USD 259 Wichita, only has 48 percent of its grades in the bottom two tiers and the statewide average is 29 percent Ds and Fs.

The percentage of 10th grade students on track to be college and career ready in Math is also extraordinarily low in USD 500 Kansas City.  Among students considered to be ‘low income,’ Kansas City is tied with Wichita at 8 percent, with the state average at 11 percent.  Just 17 percent of those considered to not be ‘low income’ in the Kansas City district are on track, versus 29 percent in Wichita and 34 percent for the state average.

By the way, Cynthia Lane is the pension spiking queen but former Blue Valley superintendent Tom Trigg is still the king.  Trigg’s 2015 final annual income of $634,454 remains the highest total pay, and his retirement ‘bonus’ of roughly $325,000 in deferred compensation spiked his annual pension by roughly $40,000.