Kansas Governor Laura Kelly at yesterday’s press conference made a consciously exaggerated and deceptive claim about COVID deaths in September.  She said there were “23 new deaths reported between Friday and today.”  It’s understandable that most people would interpret Kelly’s statement as did Hawver’s Capitol Report, which wrote “She said there were 23 COVID-19 deaths in the state over the weekend, bringing the total to 534.”

Kelly parsed her words carefully to deceive media and citizens.  Most of those deaths didn’t occur over the weekend…they were just reported over the weekend.  According to their chart showing deaths by date of death, no one died on Saturday and just one person died on Sunday.  The Sentinel compared deaths by date since March with the weekly change reported by KDHE…and found that most of the deaths reported in September occurred in prior months. 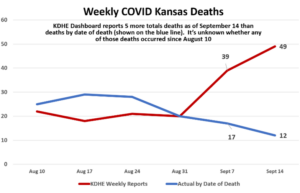 The Monday reports from the Kansas Department of Health and Environment reflect 39 new deaths reported for the week ended Sept. 7 and 49 more for the week ended September 14; that’s 88 COVID deaths in September.  But only 29 of them occurred in September; the rest occurred in prior months according to KDHE. (At press time, KDHE hadn’t assigned dates to five deaths, so it’s possible that September deaths could be as high as 34.)

Why would Governor Kelly want people to think COVID deaths are rapidly increasing when they are actually declining? Given Kelly’s objections to being questioned about her COVID responses, one must wonder if she thinks frightened voters are easier to control and manipulate.

House Majority Leader Dan Hawkins (R-Wichita), who has had his own transparency issues with the Kelly administration, says Kansans deserve the truth, not talking points.

“The lives of hundreds-of-thousands of Kansans have been impacted in some way by the response to this pandemic. Many families have experienced extreme financial hardship as a result of lost jobs and failed businesses. Those Kansans deserve the unvarnished truth whether it’s good or bad. It is always the responsibility of state government to present accurate, easily understood information, but even more so during a time of crisis.”

Kelly’s deceptive claim about the COVID death trend is the latest in a string of her administration’s attempts to mislead.

Last month, KDHE hid a low testing rate to scare people with a claim of Kansas having a high COVID positivity rate.

The Kelly administration has a habit of ignoring media inquiries that question their narrative and rejected at least two Open Records requests, hiding behind a legal technicality that says government officials can’t be compelled to “create” a record.  They don’t deny having the requested information…they just don’t want to produce it.

“Science, statistics, and analysis are now painting a different picture of the impact of the virus than what was originally anticipated.   The death rate in Kansas is not at the 4% rate once predicted and is instead at a low overall rate of 1.07%.  Outside of long-term care facilities, the death rate is 0.6%.  Kansas citizens and Kansas business owners are taking the necessary steps to stop the spread and go about their work safely.  Fear and more government mandates are not helpful or necessary and only inhibits our road to economic recovery.”