At his press conference yesterday, Norman said Kansas has the 6th-highest COVID positivity rate in the nation, at 10.3%.  Norman didn’t cite a source for his claim and KDHE didn’t respond to our questions by press time.  Data from Worldometer, however, comes very close; as of August 26, they show Kansas ranked #7, with a 10.2% positivity rate. 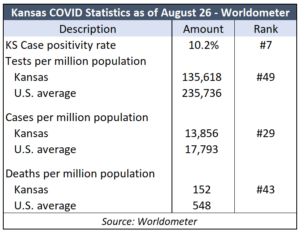 But here’s what Dr. Norman conveniently excluded – Kansas has the 2nd-lowest COVID testing rate in the nation, at 135,618 per million, which is 42% below the national average.

Dr. Christine White, a Johnson County pediatrician, recently told the Blue Valley school board that COVID positivity rates are artificially high because “the data is obtained from a skewed sample.” White says the vast majority of people tested in Johnson County already have symptoms or have a known exposure to COVID.

Michael Austin, an economist and Director of Entrepreneurial Government for the Sentinel’s parent company, Kansas Policy Institute, says the combination of factors – testing far fewer people than most states and testing a lot of people who already have symptoms – likely results in a strong convenience bias.

“Like a radio host polling his fan mail to see if they like the show, Kansas is placing over-reliance on tests of those with a reasonable suspicion they already have COVID. This statistic under-represents the community at large and should not be the basis of any re-opening policy.”

Dr. Christina Brandmeyer, a Johnson County resident who specializes in pharmacoeconomics, says reliable COVID positivity rates can only come from true random samples of the population, which is not the case in Kansas or Johnson County.

Brandmeyer references a study published on the CDC website. It shows a statewide random sample in Indiana estimates the “prevalence of current or previous SARS-CoV-2 infection in late April 2020 was 2.79%.”  On April 30, the State of Indiana’s official positivity rolling average was 13%…or 4.7 times greater than the statewide random sample found.

“The issue is the delta between what was seen with a randomized sample vs the nonrandomized methodology. Since the nonrandomized is what most states and counties are using, then this shows bias and is not an accurate reflection on the general population.”

The Kelly administration focuses on the positivity rate to wag a finger at Kansans, but they make little mention, if any, of the encouraging COVID news.  The percentages of cases requiring hospitalization or resulting in deaths have been steadily falling, and the per-capita number of cases and deaths are far below the national average.

“The public health advice I think that I would give is that this would be a ‘gap year’ for doing anything that’s truly optional and stick with the things that are truly essential for schools,” he said. “From a public health perspective, there’s no question we would reduce the risk of disease transmission were we not to have those (sports).”

There are probably tens of thousands of parents, students, and business owners who think this might be the time for Dr. Norman to take a ‘gap year.’