KDHE Secretary Lee Norman shared a COVID case chart with media this week, which he said shows the counties that abided by Governor Kelly’s mask mandate are ‘winning the battle.’ But he deceptively doctored the chart to justify mask mandates. 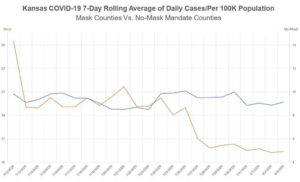 At about the 15-minute mark of the recording, a reporter asks (according to Norman’s restatement of the hard-to-hear question, “If the no-mask counties would start masking, would it (blue line) drop, and would it dip down below the mask counties.”

Norman said, “I think it would.”

But the chart was consciously manipulated to produce that appearance by comparing the same data (cases per day) on different axes.

Cases for mandate counties are based on the left axis, with a range of 15 to 25, while those without mandates are based on a secondary axis on the right, with a scale of 4 to 14.

But the results look dramatically different when shown below on the same axis.  The mask counties show a decline and the trend is down a bit for those without mandates.  But Dr. Norman doesn’t want people to see that counties with mask mandates have about 77% more daily cases per capita than the counties without mandates.

He told reporters that the unmasked counties might dip below the others if they ‘masked-up’ but those counties already have fewer cases!

Many counties that rejected Governor Kelly’s statewide mandate did so because there were very few cases in their counties.  As of August 3, less than 1% of the Kansas population was confirmed to have had COVID at some time, and the rates of hospitalization and death have been steadily declining.

Background on the chart

The Topeka Capital-Journal reports Norman showed the chart below on the left, comparing 15 counties with mask mandates to the 90 counties that rejected the governor’s order.  The Sentinel asked KDHE to provide the names of the counties and the calculations used to produce the chart; they didn’t respond, so we filed an Open Records request.  In the meanwhile, we’ve done our best to reproduce the chart, shown below on the right. 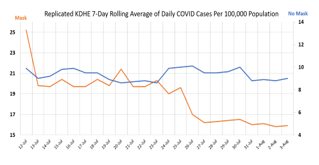 Norman is quoted as saying, “The experimental group is winning the battle,” Norman said. “All of the improvement in the case development comes from those counties wearing masks.”

That’s not true, however, as the KDHE chart shows the blue line starting a little higher than it ends.  But that was only the beginning of his intent to deceive, as evidenced by his response to a reporter’s question at the press conference.

Economist Michael Austin, director of the Center for Entrepreneurial Government at the Sentinel’s parent company, Kansas Policy Institute, says Dr. Norman’s egregious attempt to deceive is a disservice to Kansans.

“At a time when the public needs government to provide sound conclusions with accurate information, it’s unfortunate the Kansas Health Secretary knowingly deceived the public into justifying his narrative.”

Austin went on to say that a valid ‘experiment,’ as Dr. Norman described it, would have only one variable – whether or not a mask mandate was in place.  But in this case, every county in his control groups are wildly different.  In both groups, there are rural counties with low population density, urban counties with high density, counties with many cases and no cases, and counties with and without outbreaks in nursing homes and other isolated clusters, just to name a few.

The Kelly administration has been repeatedly criticized for lack of transparency throughout the COVID situation.

Kansas House Majority Leader Dan Hawkins recently expressed concern to Governor Laura Kelly that her Department of Health rejected a news outlet’s Open Records request and slow-walked his own request.  She didn’t even give him the courtesy of a response.

“Governor Kelly and her administration have failed Kansans time and again, but manipulating data to intentionally deceive the entire state is a new low. Tens-of-thousands of Kansans have lost their jobs and businesses as a direct result of Governor Kelly’s politics-first response to the COVID pandemic, and these individuals struggling to make ends meet deserve to know the truth. It is reprehensible for a public servant like Dr. Norman that we trusted to protect our health and safety in a nonpartisan way to intentionally spread misinformation. The Kelly administration has lost all credibility.”