The state of Kansas had 65,400 fewer jobs in October than in February, showing the economic devastation of COVID restrictions will continue for some time.  The Bureau of Labor Statistics data shows a 4.6% decline in private-sector employment with 53,500 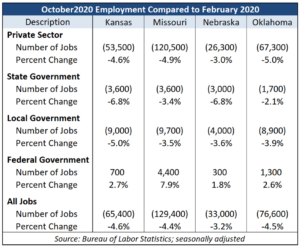 fewer people working.  There were 3,600 fewer state government jobs, down 6.8% from February, and 9,000 fewer local government jobs.  Federal employment was 700 higher but probably a temporary increase due to extra census workers still employed.

Every state’s employment totals are down from February but there are some notable differences.

Nebraska, where businesses weren’t ordered closed as they were in Kansas, suffered just a 3% loss in private-sector jobs.  Had Kansas only lost 3% instead of 4.6%, there would have been 17,700 more people working.

States not locked down had less job loss

The seven states not shut down by their governors earlier this year – Arkansas, Iowa, Nebraska, North Dakota, South Dakota, Utah, and Wyoming – continue to show less loss than the other states. 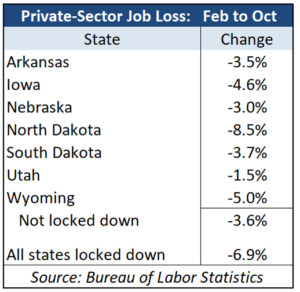 As a group, their private-sector employment was down 3.6% from February, compared to 6.9% for the states that were shut down.

Results are similar for a year-over-year comparison.

The states not shut down had 3.3% fewer private jobs compared to October 2019; that’s much better than the 6.3% loss in the other states.

State workers also fared better, dropping only 2.2% in the states allowed to remain open versus 5.2% in the other states.

But while every state lost private-sector workers since last October, five states added to their state government payroll. 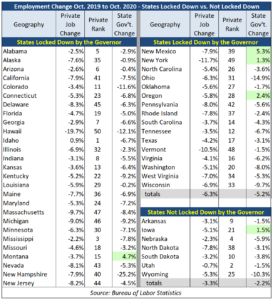