The Kansas Department of Labor just released data showing seven counties had more government jobs than private-sector workers in the fourth quarter of 2019.  It’s likely worse now since about 107,000 private workers lost their jobs since Governor Kelly shut down the economy in March, and Kelly protected state jobs. 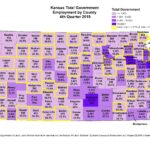 This map showing the number of government jobs in each county and the underlying data was sent to legislators yesterday.

Logan County, in northwestern Kansas, has the dubious honor of having the highest percentage of government jobs at 60%.  The county has 720 local government employees, 47 state and federal employees, but just 511 private-sector employees. 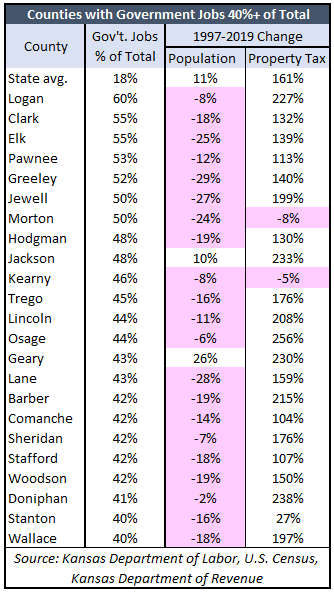 Sixteen other counties had between 40% and 50% of their total jobs in government, and all but two of them also lost population between 1997 and 2019.

Counties with higher levels of government tend to have small population levels.  Only three of the 23 counties with 40% or more of their workforce in government have populations greater than 10,000 and 14 of them have less than 3,000 residents.

As a result, the property tax burden in those counties tends to grow faster than other parts of the state.  Property tax declined in two counties – Morton and Kearny – since 1997 but most others have triple-digit increases.

Lack of transparency makes it much easier for cities and counties to raise property tax.  Truth in Taxation legislation, favored by 75% of voters, would have required city and county officials to vote on the entire property tax increase they impose.  It passed the Senate by a vote of 35-2 and by 89-28 in House, but city and county officials didn’t want to tell the truth about their tax increases, so Governor Kelly vetoed the bill.