Editor’s note: this story was revised on June 23 to reflect Oklahoma as being a locked-down state; we regret the error.

Employment data released today for May by the Bureau of Labor Statistics shows Kansas has about 107,000 fewer private-sector jobs than in February, prior to Governor Kelly’s mandatory shutdown order over COVID-19.  At the same time, state government employment declined by just 200.  Both comparisons are on a seasonally adjusted basis. 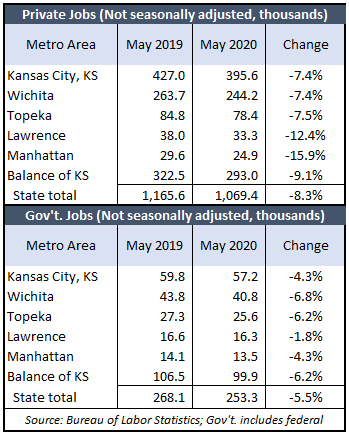 Seasonally adjusted regional breakouts aren’t available, but without seasonal adjustment, private jobs declined by 8.3% statewide over the previous year.  The Manhattan metro (down 15.9%) and the Lawrence metro (down 12.4%) suffered the greatest loss.  The Kansas City and Wichita metros both lost 7.4%, the Topeka metro was down 7.5% and the rest of the state was off 9.1%.

Government jobs, including state, federal and local, declined 5.5% from a year ago.  The Lawrence metro had the smallest decline at 1.8%.  The metro areas of Kansas City and Manhattan both dropped 4.3%, the Topeka metro and the non-metro portion of Kansas declined 6.2%, and the Wichita metro lost 6.8% of its government workers.

States locked down during COVID have more job loss

Residents and business owners in states under a COVID shutdown mandate from their governors are suffering far more job loss.  May private-sector employment in those 43 states was 13.1% lower than a year ago, but the states not shut down by their governors only lost 7.7% of their private job base. 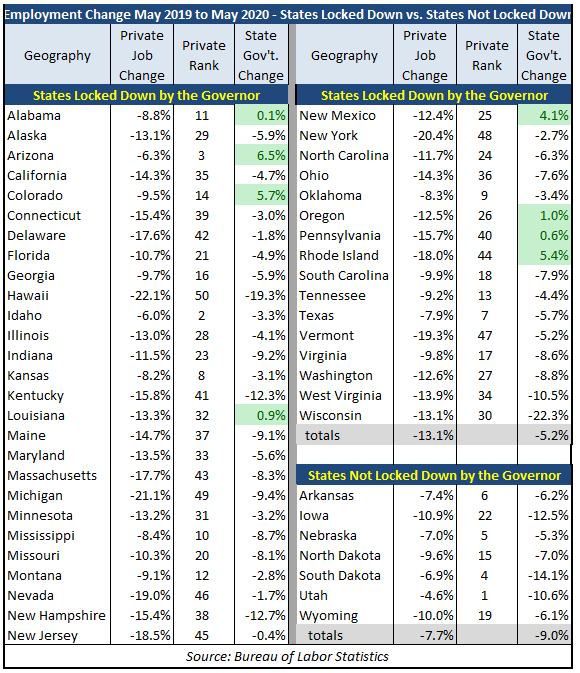 Thirty-two of the 43 states shut down suffered more than 10% private job loss.

The governors of those 43 states were much more protective of state employees, however.  In fact, eight states – Alabama, Arizona, Colorado, Louisiana, New Mexico, Oregon, Pennsylvania, and Rhode Island – had more state employees in May than a year ago.  New Jersey’s private sector was devastated with an 18.5% job loss, but state government jobs declined by just 0.4%.

None of the governors that didn’t lock their states down increased state employment levels.  Collectively, the shutdown states had 5.2% fewer state government employees in May compared to a year ago, compared to a 9% decline in the seven states that weren’t shut down.

South Dakota Governor Kristi Noem took a lot of heat from national media for not closing her state, but her actions are positioning the state for a COVID economic recovery.  With private job loss of just 6.9%, tax revenue loss should be must less than many other states; Governor Noem will also be better prepared to deal with tax loss, having reduced state government employment by 14.1%. 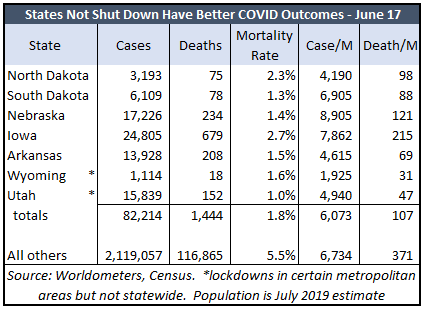