The August jobs report from the Bureau of Labor Statistics shows Kansas lost 3,400 jobs between July and August, while the nation overall added 315,000.

The losses were fairly widespread.  Construction lost 600 jobs, there were 500 fewer jobs in manufacturing and in Leisure & Hospitality, and the retail sector lost 900 jobs.  The Financial Activities sector lost 800 jobs and there were 1,400 fewer state, local, and federal government jobs.  The Education Services, Wholesale Trade, and Transportation & Utilities sectors each gained jobs.

There are still about 33,000 fewer people working than in January 2020. At the pace since January 2021, it will be several months into 2023 before employment returns to pre-pandemic levels. 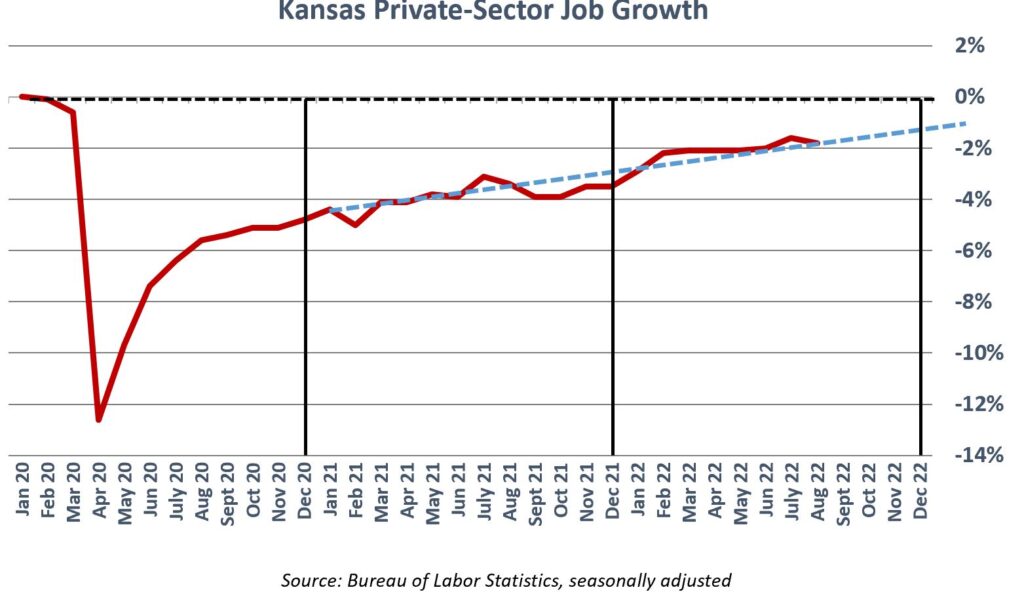 Kansas jobs report is the worst in the region

Iowa and Colorado both recorded employment gains in August.  Missouri, Nebraska, and Oklahoma suffered job reductions, but each lost a smaller percentage of total employment, making Kansas the worst performing state in the region.

Kansas also has the worst employment trend in the region relative to January 2020.  Colorado has more people working now, and Iowa, Nebraska, Oaklahoma, and Missouri are within one percent of their pre-pandemic level.  Kansas is still 2.3% below January 2020.

The politicians like to say that the state’s economy is ‘booming’ apparently aren’t looking at the data.  In addition to having the worst job growth in the region, the overall economy isn’t growing.

The most recent GDP report from the Bureau of Economic Analysis (BEA) shows Kansas had the second-worst growth real (inflation-adjusted) GDP rate in the region.  The Kansas economy declined at an annualized rate of 2.6%. Oklahoma was the worst, with a 3.7% annualized decline, but that was driven by the state’s dependence on the oil and gas industry, which is under attack in Washington.  The Mining, Quarrying, and Oil & Gase sector accounted for 16.9% of Oklahoma’s economy in the first quarter, versus 1.2% in Kansas.  Real GDP x-oil and gas is flat for Oklahoma.

Second quarter GDP results will be released on September 30.