The group that creates budget estimates for the state of Kansas revised its tax revenue numbers last week, estimating the state will collect $525.5 million more than previously estimated over the next two years. Gov. Laura Kelly said the additional funding will help the state “reinvest in important priorities” like schools and Medicaid expansion. Republican leaders and state economists, however, are saying not-so-fast.

“It doesn’t save the budget,” says Michael Austin, an economist and director of the Center for Entrepreneurial Government at Kansas Policy institute, which owns The Sentinel. “The Governor is going to come out in January with a new budget for next year, and she says she wants to spend even more money.”

Kansas Legislative Research already estimates spending will increase by about $2 billion – 32% – between 2017 and 2023, not counting Governor Kelly’s plan to expand Medicaid and other proposals that didn’t pass this year. 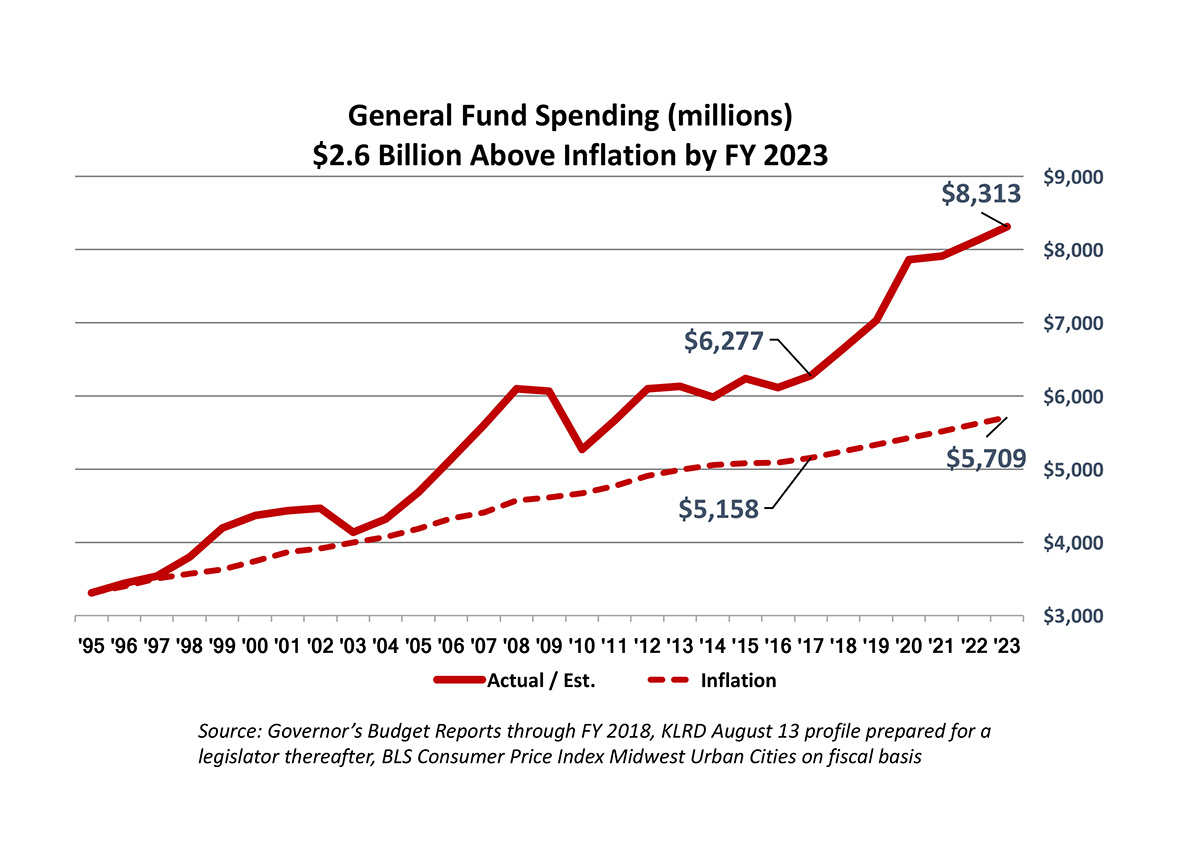 Prior to the revised tax revenue estimates, legislators faced an estimated $582 million budget deficit through fiscal year 2023, but compliance with state spending law put the real deficit at $1.1 billion. The Kelly administration credited the state’s improved revenue outlook to low unemployment and economic expansion. However, Dave Trabert, chief executive officer of Kansas Policy Institute, said the adjusted revenues are really the result of tax increases. Last year, individuals and corporations paid 11% more in taxes than the year before. Individuals are now estimated to pay an additional 4.1% this year and corporate taxes are expected to increase by 6.3%. Trabert says those increases are the ongoing impact of Governor Kelly’s latest tax hike; Kelly twice vetoed legislation earlier this year that would have prevented tax increases resulting from changes in the federal tax code.

The additional revenue estimates renewed calls from Senate President Susan Wagle to pass the federal tax cut revenues back to taxpayers. She also suggested that lawmakers should use the enhanced budget figures to cut sales tax rates on food. Lawmakers bundled those proposals last year, and Kelly vetoed the initiatives.

Meanwhile, special interest groups are calling for additional funds for their pet issues. For instance, the Kansas Association of School Boards posted a blog post shortly after the new revenue estimates were announced. The post warned against lowering tax rates and cautioned that increasing state spending on things like early childhood programs, higher education or mental health services could derail the full implementation of school funding increases adopted by lawmakers last year.

Kansas House Speaker Ron Ryckman warned that the Governor’s next budget, which will be based on the recent revenue estimates and presented to the legislature next January, are likely to include more spending increases.

“Her policies are unsustainable and leave Kansas increasingly vulnerable when there is an economic downturn,” Ryckman said in a statement.