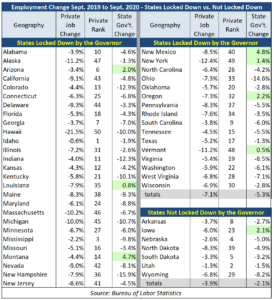 Idaho had the smallest loss at 0.6%; it’s among the locked-down states but is listed as having the second-lowest COVID restrictions overall in a recent WalletHub report. South Dakota is ranked #1 for having the fewest restrictions; Governor Kristi Noem has taken a lot of media criticism for not locking her state down but South Dakota has the fifth-lowest private-sector job loss at just 3.3%.

State employees also tend to fare better in states not locked down by their governors, declining just 2.1% compared to a 5.3% loss in the locked-down states.  Eight states have more state workers than a year ago – Arizona, Iowa, Louisiana, Montana, New Mexico, New York, Oregon, and Vermont.

Lower COVID death toll in states not locked down

The disparity in job loss may be intuitive, but not this one – data from Worldometer show the states that were locked down have so far suffered 70% more COVID deaths per million of population (699 vs. 411). 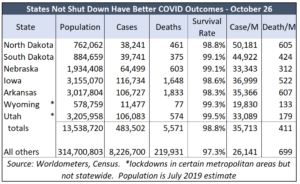 Each of the states not locked down have fewer deaths per million than the average of the other states.  Wyoming and Utah are exceptionally low, at 133/M and 179/M, respectively; Arkansas has the highest among those states, at 607/M.

The states not locked down have more cases per million of population, but they have a higher survival rate (98.8% vs. 97.3%). 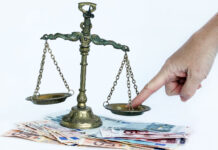