Recently-sworn-in Lt. Governor David Toland will be continuing to serve as Secretary of Commerce during his tenure — and will receive both his $123,000 a year salary as Commerce Secretary as well as approximately $31,300 for serving as Lt. Governor.  Toland’s total pay is $154,313 this year; his salary last year was $123,000 and he was also paid about $9,400 for “work with the recovery office” according to the documentation provided in the Sentinel’s Open Records request.

David Toland received the bonus for working in the Recovery Office from Sept. 6, 2020, to December 27, 2020, at the rate of $589.38 per week, a time when tens of thousands of Kansans were receiving no pay while struggling to even get unemployment payments.

Having a Lt. Governor serve in another capacity is far from unprecedented. The Kansas Lt. Governor’s duties are “such as the governor may assign,” usually involving chairing committees and serving as acting governor when the sitting officeholder is ill or out of state.

In the mid-1990s, Republican Sheila Frahm — later appointed to the United States Senate to replace Bob Dole — was both Lt. Governor and Secretary of Administration.

The circumstances were hardly similar, however, as the state was not at the time facing an unprecedented pandemic and the economic devastation which followed.

Kansas State Senate Majority Whip Richard Hilderbrand questioned if having a part-time commerce secretary was the right move for Kansas at this juncture.

“While Kansas is facing extremely high unemployment and a stagnant economy,” Hilderbrand said. “Having one person that can concentrate on the issues that our state’s economy is facing would be the better option.”

According to a study by Wallet Hub, Kansas is experiencing the slowest unemployment recovery in the nation.

As of Jan. 14, 2021, Kansas has the highest growth in weekly unemployment claims in the nation, jumping nearly three thousand percent over this same week in 2019, with more than 80,000 Kansans applying for benefits each week. 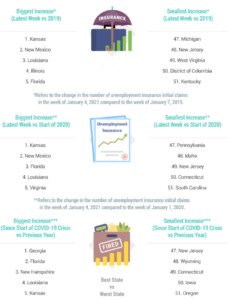 Kansans have so struggled to get the unemployment benefits they are entitled to by law, that a class-action lawsuit has now been filed after many have gone months without being paid.

As if that’s not bad enough, Kansas was also struggling before the pandemic.

After three consecutive years of tax increases, Kansas had the 7th-worst private-sector job growth between 2016 and 2019, growth just 1.3% over the three-year period.  The Sunflower State is now in its 5th-consecutive decade of economic stagnation.  As shown in Kansas Policy Institute’s 2021 Legislator Briefing Book, there would have been about 313,000 more jobs in Kansas in 2019 if jobs had just increased at the national average.

Kansas is also the sixth most moved-out-of state in the nation, according to United Van Lines.

With all this, Gov. Kelly just submitted a budget with two tax increases and other gimmicks to pay for a 29% spending increase since 2017.

Next week, the governor and David Toland are scheduled to unveil their ‘new’ plan to grow the economy, and hall talk in the capitol indicates it will propose doing more of the same — subsidies to a few favored businesses — that was done over the last few decades of economic stagnation.