Tax reform is usually associated with attempts to reduce taxes, but the first day of hearings at Kansas Governor Laura Kelly’s Council on Tax Reform was laser-focused on how to pay for rapidly-growing government spending.  The only mention of possibly reducing the burden was about the sales tax on food.

On the 2018 campaign trail and during this year’s legislative session, Governor Kelly said massive school funding could be accomplished without a tax increase but now reality is sinking in.  The Kansas Division of Budget presented a projection reflecting budget deficits of $14.1 million FY 2022 and $482.5 million for FY 2023.  But that projection did not comply with the state law requiring an ending balance of at least 7.5%; taking that into account, the real deficit is $1.1 billion between FY 2021 and FY 2023.  And even that big deficit assumes Governor Kelly will transfer $470 million from the state highway fund between this year and FY 2022. 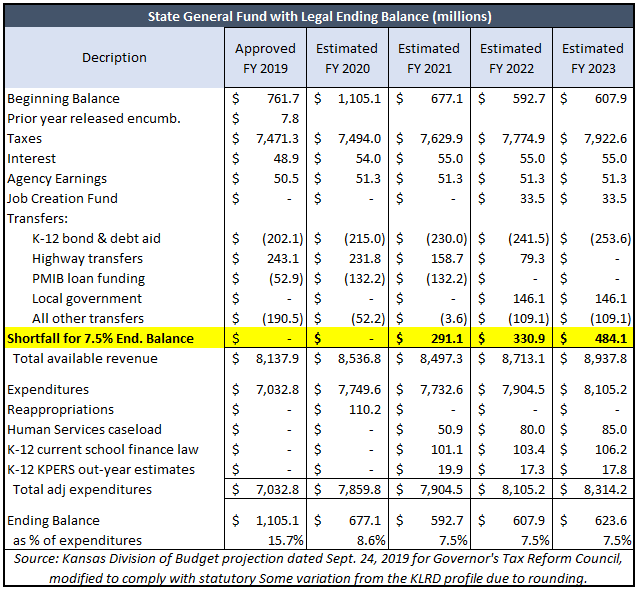 Kelly welcomed her hand-picked council members, saying, “As you know, you’ll do an in-depth study of the state’s tax system with a goal of making recommendations for reform that lead to a fiscally responsible and sustainable tax structure while keeping the individual and corporate burden as low as possible,” she said.

“Her emphasis is on wanting enough money, meaning more money.  Hoping to keep individual and corporate tax burden as low as possible is supposed to sound promising, but she didn’t say she wants taxes reduced.”

Tax reform council co-chair and former state Sen. Steve Morris said in the future, the council will focus on revenue streams, including the transportation program, fuel taxes, and revenue streams from local and state governments.

“There is probably some low-hanging fruit that we can use to get through this year,” he said. “…Council may have some other ideas on taxes we haven’t thought of.”

Former state budget director and committee member Duane Goossen said the budget profile includes an increase in expenditures of roughly $200 million for three areas including education, human services, and pensions. He noted the budget profile doesn’t include potential new spending in other areas.

The council spent little time debating tax policy or revenue inputs, focusing instead on possible spending initiatives. After lunch, the committee heard presentations from the Department of Commerce and the Department of Transportation.

“There was no discussion about entrepreneurs or businesses or families,” said James Franko, Kansas Policy Institute Vice President. “The discussion yesterday was all about government, bureaucratic spending priorities and nothing about what it takes to provide working families with greater opportunity.”

The tax reform council is holding its second meeting today and will meet a handful of times between now and the end of the year. They’ll reconvene again after the 2020 legislative session.

According to Kelly, the committee’s 18 members “represent all walks of life.”  But Trabert says Kelly’s picks for the committee underscore her desire for higher taxes.

“Most of her appointments represent state and local government, or entities that benefit from government spending.  There are fiscally-conservative tax policy experts at Kansas universities who weren’t invited; just people who spend tax dollars.”

One tax reform council member commented on the absence of corporate representation. Appointee Larry Weians, a Sprint Vice President, sent a proxy in his place for the day, who said she thought she was the only business representative in the room.

“We have several House members who are experienced in tax policy,” Ryckman said in a statement. “I wanted at least one of them to have a voice on the council, but the Governor wouldn’t allow it.”

Two proxies filled in for committee appointees on Tuesday.

“I’m disappointed that the Governor is using a double standard–allowing some entities to send a delegate with the best expertise for this effort while prohibiting others from doing that,” Ryckman said. “I don’t know what the Governor’s end goal is, but I know Kansans aren’t looking for another tax increase.”