Kansas school districts continue to pump money into Schools for Fair Funding, a coalition of school districts that successfully sued the state twice for additional taxpayer funding for public schools. In its first lawsuit against the state, known as the Montoy case,  the court determined in 2005 that funding for schools wasn’t suitable. In a 2019 decision, known as the Gannon case, the court ruled school funding wasn’t adequate.

Funding attorneys paid off for school districts. Since 2005, Kansas public schools have paid more than $8.7 million to SFFF, which uses the money for attorney fees. In return, taxpayers have dished out an additional $756 million per year in school funding due to the Montoy decision and will fund another $1 billion annually due to the Gannon decision.

The Kansas Department of Education estimated that funding would be $15,105 per student last year, and will eventually exceed $16,500 per student.  But school boards aren’t spending all the tax money they receive.  Kansas Policy Institute, the Sentinel’s parent company, recently reported school districts began this year with almost $1 billion in operating cash reserves, with about half of that amount added to reserves since 2005.

A revolving door of school districts has supplied funding for the lawsuits since 2005. Of the 286 Kansas school districts, 81 have provided funding for Schools for Fair Funding at some point. Despite a Kansas Supreme Court decision resolving the latest case, 37 districts continue to fund the organization.  Members collectively gave about $149,000 to SFFF last year and will do so again this year.

“It’s a disappointment that school districts are using taxpayer money to continue a battle that has been resolved by the Kansas Supreme Court,” Rep. Kristey Williams, an Augusta Republican, said. She is a former teacher and chairs the Kansas House K-12 Budget Committee.

The Kansas Supreme Court maintains jurisdiction in the school funding case until the legislature’s phased school funding plan is complete in FY 2023. 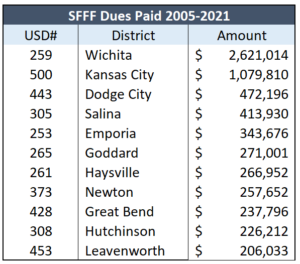 Membership dues are based on the number of students in the district. The Wichita School District, USD 259, will contribute about $53,000 to Schools for Fair Funding this year. By the end of this school year, the Wichita district will have provided more than $2.6 million to the organization. The Kansas City School District, USD 500, will have paid more than $1 million in membership dues, including more than $23,000 this year.

Chanute USD 413 is among the 37 districts sending money to SFFF this year. The district contributed $2,015 to the organization for the first time in FY 2020. Cassie Cleaver, a school board member for the district, says though newcomers, USD 413 officials have followed the school funding saga for years.

“Chanute feels strongly that it is entitled to adequate resources to educate all of its children as guaranteed by the Kansas Constitution,” she said. “That is the promise of the Gannon remedy if it is fully implemented.”

She says the Chanute district has learned from history.

“This history of legislative relapse of its school funding obligation has caused the school districts that govern SFFF to keep the organization active in a school finance monitoring mode during the implementation of the current remedy,” Cleaver said.

Chanute is one of the districts that didn’t spend all the funding it received, having increased operating cash reserves from $1.5 million to $6.2 million.  The district’s budget report shows it spent $14,034 per student last year and is budgeting to spend $17,542 this year; only 48% of this year’s budget is allocated to Instruction, defined by KSDE as direct interaction between teachers and students.

In 2005, the Montoy case was dismissed, because legislators and the plaintiffs, with the approval of former Gov. Kathleen Sebelius, signed off on a phased-in plan to increase school funding. In the face of a recession a few years later, the Sebelius administration and her successor Mark Parkinson’s administration were unable to implement all the increases and made small, temporary reductions to funding.

The resulting Gannon case was filed on Election Day in 2010.

“It was Machiavellian brilliance that made the (former Gov.) Brownback administration– before it was even elected — responsible for the K-12 funding cuts made by the Sebelius-Parkinson administration,” said James Franko, President of the Kansas Policy Institute.

History could repeat. Gov. Laura Kelly warned in a press conference last week that budget cuts are likely in FY 2022, with the state facing an estimated $1.5 billion deficit.

“We will see some pretty serious cuts across the board– in education, in transportation, in the pension contributions,” she warned in a COVID-related press conference. “I meant it will be drastic and very harmful to Kansas and to our local municipalities.”