Overland Park residents this summer will be invited to attend the city’s first Truth in Taxation hearing where city officials will attempt to justify more than a 10% property tax hike.  Taxpayers will need to bring their hip waders because the city’s 2022 budget report shows the rhetoric will be deep and some of it will be exceedingly deceptive. 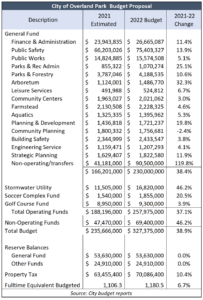 For starters, city officials are pitching the budget as a 9.6% increase, but the real increase is 38.9%.  Most government budgets are designed to be deceptive by showing the increase from this year’s budget to the budget for the next year instead of comparing the budget to actual spending for the current year.  So, when a city spends less than it budgeted, the real increase can be dramatically understated.

For example, the budget report shows a 6% increase in Finance and Administration over the $25.2 million budget this year, but they only expect to spend $23.9 million; the $26.7 million budget is really a jump of 11.4% over 2021 estimated spending.

An 8% increase is shown for Public Safety, but the budget is almost 14% higher than estimated spending this year.  Public Works shows no change, but the city is budgeting 5.1% more than they think they will spend this year.

Total General Fund operating spending is budgeted to jump more than 11%. That budget reflects a let-them-eat-cake attitude of the bureaucracy and city council, especially with inflation expected to be maybe 2% next year and some residents and businesses still struggling to recover from government-imposed COVID restrictions.

The City of Overland Park has increased property tax by 320% since 1997, according to the Kansas Department of Revenue.  Inflation was 53% and the population increased by about 45%; that means property tax increased more than three times as fast as inflation and population combined. 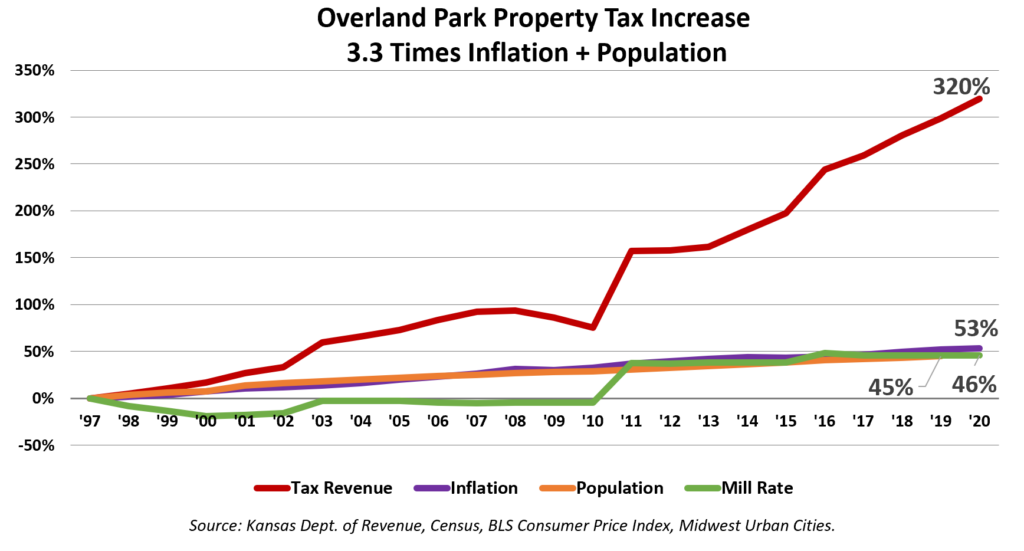 This is the first year of budget preparation under the new Truth in Taxation law, which forces the mill levy to decline so that new valuations produce the same amount of property tax as produced by the prior year’s valuations.  The adjusted mill levy is called the Revenue Neutral Rate in state statute.

The proposed mill rate of 14.582 is a 10.7% increase over the Revenue Neutral Rate of 13.174.  That is a little higher than the 10.4% increase over estimated collections, but it is less than the 12.2% increase over this year’s budget for total property tax.  The Sentinel asked Chief Financial Officer Gena McDonald and Assistant City Manager Kate Gunja to provide the calculations used to arrive at the Revenue Neutral Rate; they said they don’t have that data but provided partial information they received from the Johnson County Treasurer’s office.  The Sentinel is still waiting for Johnson County to respond to our request for the missing data.

City officials don’t talk about the property tax increase as being over 10%, however.   It is called “just a one-mill increase” to pay for additional public safety spending.

City Manager Bill Ebel’s letter introducing the budget says, “additional investments in Public Safety of this scale are not sustainable throughout the five-year plan” without a mill levy tax increase.  But that deceptive scare tactic is designed to make think public safety will suffer if property taxes aren’t increased.

Ebel says a one-mill rate increase will generate $4.2 million, so one way to spend more on public safety is to reduce the $53.65 million General Fund ending balance.  That piece of public safety spending could be sustained for more than ten years without a property tax increase.

The mention of the five-year plan is a carefully worded caveat, referencing the city’s desire to maintain at least a 30% ending balance.  Officials would have you believe that is necessary, but it is not.  The State of Kansas, for example, is supposed to have a 7.5% ending balance and often goes below that level.

City officials could also spend less in other areas.  For example, why is a 19.8% increase in Planning & Development necessary? Or 11.9% in Strategic Planning?  Or 11.4% in Finance & Administration?

Most of the increase in public safety spending, by the way, is not on more patrol officers, but on an 11-person Behavioral Health Unit that was recommended by the Behavioral Health Task Force.  Appointing task forces is another way that elected officials justify spending more money.

Another way to sustain the proposed public safety increase is to make better use of existing resources (maybe a How Can We Operate More Efficiently Task Force).

The City of Overland Park has added 84 new fulltime-equivalent budgeted positions since 2015, and the proposed budget adds 53 more.  An efficiency task force could look for ways to eliminate unnecessary staff through attrition and retirement, as well as examining discretionary spending.

A task force of independent experts in logistics, procurement, and operations (not city employees) could look for opportunities internally as well as ways to reduce costs (and taxes) by sharing services with other cities and the county.

Overland Park received several million dollars in federal COVID funding last year and is scheduled to collect $19.8 million more over the next 12 months from the American Rescue Plan Act (ARPA).  The Sentinel asked Gunja where that spending was covered in the proposed 2022 budget, and she confirmed that it isn’t mentioned.

Gunja and McDonald provided documentation of almost $100 million in spending from unbudgeted funds in 2019.  They declined to provide information for 2020 that is pending release and said no estimate of unbudgeted spending exists for 2021.

Hiding revenue and spending from citizens is another government-sanctioned gimmick that state legislators could fix.