Sales tax revenues are down, and Johnson County officials are waiting for the courts to determine the fate of several big-box retailer’s tax appeals. But instead of looking for ways to control spending, they are considering a 2020 budget that boosts spending by about $115 million over this year’s estimate.

At a hearing for the Johnson County 2020 budget, commissioner Mike Brown said the county is looking at a potential shortfall down the road.

“As we continue the deliberations about what we’re doing here, the taxpayer is taxed out,” he said. “They’re tapped. And they’re tired of us consistently pushing the envelope. When you’re looking at a potential shortfall, how can we sit here and push forward?” 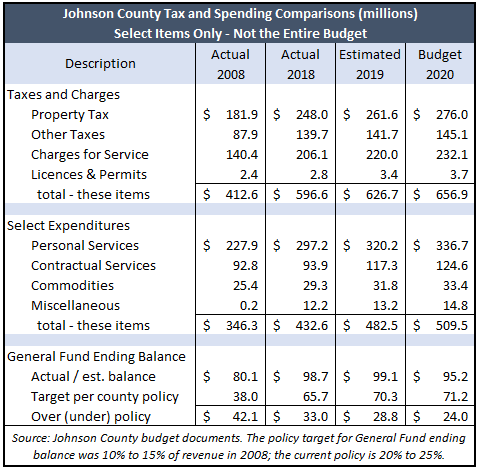 The proposal doesn’t increase property tax rates, but assessed valuations increased by 5.5% countywide, which means most property owners will pay more in taxes. And that’s on top of a 5.5% property tax increase this year, while inflation has consistently been below 2%.

The Kansas City Star reported that local officials are baffled since the national economy is booming, unemployment is near record lows, and the tax base is growing. However, as Kansas Policy Institute economist Michael Austin points out, “Kansans are dealing with their third consecutive year of state income tax hikes… and tax increases take a big bite out of Kansas shopping.” (KPI owns The Sentinel.)

And according to Brown, another of the county’s looming revenue challenges–the way Johnson County’s appraiser assessed big-box retailers– is also taking a bite out of shoppers’ wallets. In a Facebook post, the Sixth District commissioner said former county appraiser Paul Welcome used a “gimmick designed to wring more dollars out of retail properties.”

Johnson County is ground zero in a “dark story theory” assessment controversy, an ongoing legal and legislative debate about how big-box retailers are assessed. The county changed its valuation methodology for big-box retailers in 2016, causing some assessments of retailers like Target and Walmart to more than double. The retailers challenged their valuations, and the court cases are not yet fully litigated. To date, however, the county has lost five consecutive big-box property appeals.

Those property tax hikes based on massive increases in assessment values are built into the price of everything consumers buy in Johnson County big box stores, Brown says.

Several people who attended the public budget hearing praised the commission for proposals to increase spending on mental health.

In a memo to commissioners, county manager Penny Postoak Ferguson says the county faced tremendous challenges over the last decade, thanks to the recession of 2008 and 2009. She said if the county had added employees commiserate with population growth, Johnson County would employ 638 more people.

“Clearly we are doing more with less,” she wrote.

County officials may feel they don’t have enough employees, but the budget reflects big payroll increases.  The Personal Services line shows pay and benefits jumped 30% between 2008 and 2018, while inflation was 14%.  The county’s budget for 2020 is 13% higher than 2018 actual, with inflation running less than 2% annually.

Counties and cities may be required to do with much less if big-box retailers continue to rack up wins in the court.

Overland Park city manager Bill Ebel told the Star he estimates the string of county court losses could reduce Overland Park’s property tax revenues by as much as 30%. “That is a scenario that is catastrophic, in my opinion, to the city,” Ebel told the Kansas City daily.

Ebel provided no justification for his claim, however.

Still, the Johnson County commission should prepare for that possibility, according to Brown.

“Now here we are, peering into the abyss and regardless of what anyone in county government may believe could or should happen, this decision will be made by a judge,” he wrote on his Facebook page. “The county should have spent precious time planning for a worst-case scenario, but unfortunately and predictably, that planning did not occur. Panic and finger-pointing will begin as the inevitable is becoming unavoidable.”

County commissioners will vote on the budget proposal during their regularly scheduled meeting Aug. 8. If approved, it becomes effective on Jan. 1, 2020. By statute, all Kansas counties and cities must adopt a budget by Aug. 25.