Kansans are seeing gains in economic prosperity, according to Michael Austin, a tax economist for the state of Kansas.

Austin made that claim on the heels of a U.S. Department of Labor January report and revisions to a 2016 report released on March 10.

“What’s good to see here, when you look back on 2016 and then go back 20 years, 2016 had record high private sector job growth,” Austin said. “This is another chapter in the book of improving economic conditions in Kansas.” 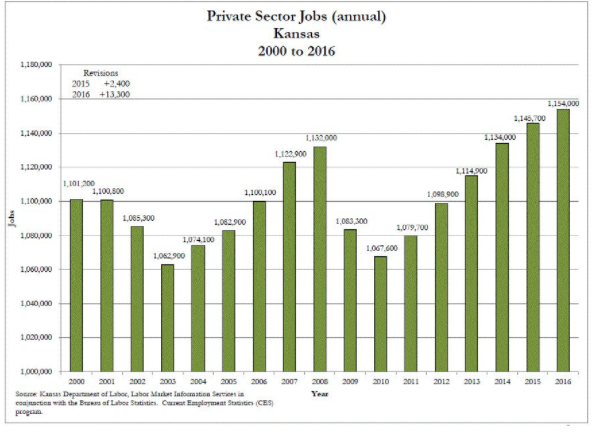 Additionally, the report shows Kansas unemployment numbers decreased from a seasonally adjusted 4.3 percent to 4.1 percent. The Kansas unemployment rate is now below pre-recession numbers–the lowest it’s been in 15 years, according to Emily Doerksen, a labor economist for the Kansas Department of Labor.

“While the unemployment rate remains low, the labor force and employment have contracted over the year,” Doerksen said in a release. “This is consistent with the survey of employers, which indicates fewer nonfarm jobs than last year.”

Sole proprietors and some pass-through businesses, or LLCs, aren’t counted in the labor report. The U.S. labor department draws its numbers from employers who pay unemployment insurance, which sole proprietors do not pay.

The U.S. Census releases data on sole proprietorships, and state officials are still awaiting current numbers. However, sole proprietorships comprised the largest segment of economic growth in the U.S. the last several quarters. Pass-through entities created 36,135  private sector jobs in Kansas between 2012 and 2014, according to the latest available data from the U.S. Census Bureau.

Austin said the positive report is due to a number of factors.

“I think most certainly policy plays a role. When you lower income taxes for Kansans as well as businesses, you encourage people to use that money however they want,” he said.

He noted that LLCs, or pass-through business, growth tripled between 2012 and 2014–the two years after lawmakers adopted an LLC tax incentive.

“Tax policy plays a role in improving conditions,” he said.

Meanwhile, the state is seeing positive gains in the agriculture sector.

“Commodity prices have stopped free falling. That has helped,” Austin said. “Our other industries are continuing to grow.”