The Olathe proposed 2022 budget includes $97 million remaining in reserves in funds that receive property tax, a 9% increase in General Fund personnel costs, and a 26% hike in capital outlay in the Debt Service Fund.  But City Council voted 4-2 to impose as much as a 9% property tax increase to meet “financial challenges” with “priority-based decision making.”

Olathe City Council meets on September 21 to finalize the budget, so they still have time to rescind the $4.6 million property tax increase, and there are many options to do so.

The General Fund has a projected ending balance of $26 million in reserve but it could be as high as $33 million.  Budgeted revenue includes a $7 million reduction for accounts receivable, and receivables have no place in a cash-basis budget.  But even a $26 million ending balance represents 25% of cash expenses, and that is almost four times as much as the State of Kansas is required to retain.

The budget has $97 million in total ending balance reserves in funds that receive property tax, including the $26 million in the General Fund.  Council members could eliminate the property tax without changing any spending plans and still have at least $92 million left over. 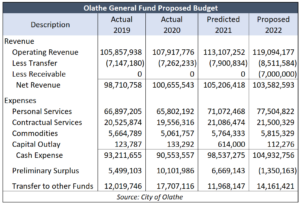 General Fund personnel costs are budgeted for a 9% increase, on top of an 8% hike this year.  The entire property tax increase could be eliminated from personnel (partly from not hiring more people) and there would still be a 3% increase in the budget.

These are just a few of the many options City Council members could adopt to hold property tax flat.  The budget isn’t published on the city website, but the Sentinel obtained the fund summaries that you can see here.

A property tax increase would be very challenging for many Olathe residents, especially retirees living on a fixed income and small business owners.

With so many options left on the table, it simply comes down to whether City Council members want to increase property tax rather than make better use of the 321% property tax hike imposed since 1997. 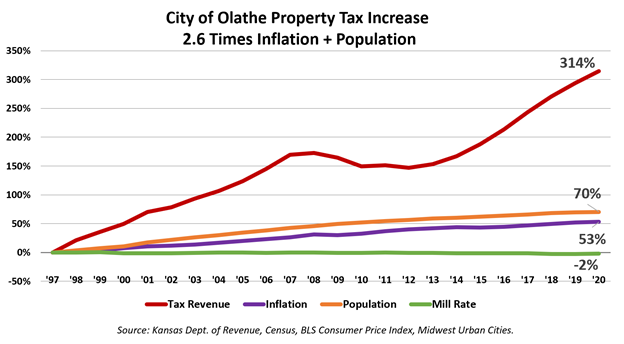 You can email Olathe City Council members before September 21 and tell them what you think of their proposed 9% property tax hike at the addresses below.