Today’s Wichita Eagle story about Kansas having the highest COVID death rate in the nation last week is just another reporting failure by mainstream media and the Kansas Department of Health and Environment – as evidenced by KDHE’s own data. 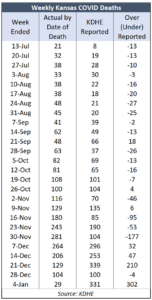 he Eagle referenced a White House/CDC report identifying Kansas as having the highest COVID death rate but failed to mention that their data is based on when states report deaths rather than when deaths occur.  Media also knows KDHE routinely reports deaths that occurred in prior months because KDHE admitted as much after the Sentinel caught Governor Kelly trying to mislead Kansans.

KDHE reported 331 COVID deaths for the week ended January 4, but their chart showing when deaths occurred (see the Death Summary tab here) only attributes 29 deaths to that 7-day period.  Put differently, 91% of the deaths reported last week occurred in previous weeks or months.

Many of the deaths reported in December appear to have occurred in November and prior months.

KDHE says another reporting issue is the reason Kansas has the slowest COVID-19 vaccination rollout in the nation.  The Topeka Capital-Journal reports that on Monday, KDHE and others offering excuses for the state’s poor showing on vaccine distribution say the CDC reporting system is merely experiencing a lag in getting out up-to-date numbers, saying that training for providers on using the reporting system was lacking.

But the Cap-Journal says KDHE’s excuse doesn’t track with health officials’ experience, writing, “…by and large, groups representing local health departments, hospitals and federally qualified health centers said they hadn’t received reports from their members of widespread struggles in reporting data to the CDC. There didn’t appear to be large-scale issues reported on training providers in the system either, making it unclear where the lag is coming from.”