A recent Wichita Eagle news report attempted to change the narrative related to a legislative proposal, according to an attorney quoted in an Eagle story that ran over the weekend. According to the Wichita paper, Senate Bill 286 is punitive legislation designed to punish county governments responsible for business closures.

That’s not the case, said Ryan Kriegshauser, an attorney quoted in the Eagle article.

“The Eagle changed the narrative to say this is punitive instead of a solution to another problem,” Kriegshauser told Sentinel.

The Eagle fear-mongered by suggesting homeowners would bear the cost through increased property taxes. The reporters, Chance Swain and Dion Lefler, wrote that Sedgwick County estimates the legislation will cost the county up to 26% of its annual budget. They quote Sedgwick County commissioner David Dennis, who warns that would result in deep cuts to county services like the sheriff’s department and public health or shift the tax burden from “business to residential properties,” the Eagle reads.

“This was discussed heavily at the Senate hearing and is being ignored,” Kriegshauser wrote in an email to the reporters seeking correction. “Sedgwick County’s figure assumes all claimants will seek property tax relief where other relief is available in SB 286.”

The Eagle presented this as a false choice to apparently scare taxpayers into opposing SB 286, writing, “In addition, at the county level, SB 286 would require counties to tap into their general funds to pay businesses for claims based on local health regulations.”

But that’s not true.  Counties would not be required to tap reserve funds.  Counties are collectively receiving $565 million in new COVID relief funds from Congress over the next 12 months and they could choose to allocate all or a portion of it to business compensation.

It’s also not true to say that commissioners would “have to” cut essential services or raise residential property taxes.  That’s another scare tactic government officials and reporters use.

In addition to Sedgwick County’s $100 million share of the $565 million going to counties, commissioners could also choose to eliminate some waste from the budget.  Dennis’ comment presumes there isn’t a dollar of waste in the budget and that every program and function is essential.

The Eagle story takes Kriegshauser to task over numbers he used in his testimony before the Senate Assessment and Taxation Committee. He noted that KDHE attributed only 1% of COVID cases in clusters back to restaurants and bars.

“A KDHE official disputed the 1% number,” the Eagle reported.

However, Kriegshauser said the numbers come directly from the Kansas Department of Health and Environment.

“You could have asked me where I got my figures rather than use KDHE to say they didn’t know what I was referencing,” Kriegshauser wrote in an email to the Eagle reporters. He included a link to KDHE’s COVID dashboard. According to the data, there were 303 COVID cases out of 37,739 traced back to bar and restaurant clusters, or 0.8% of all clusters. 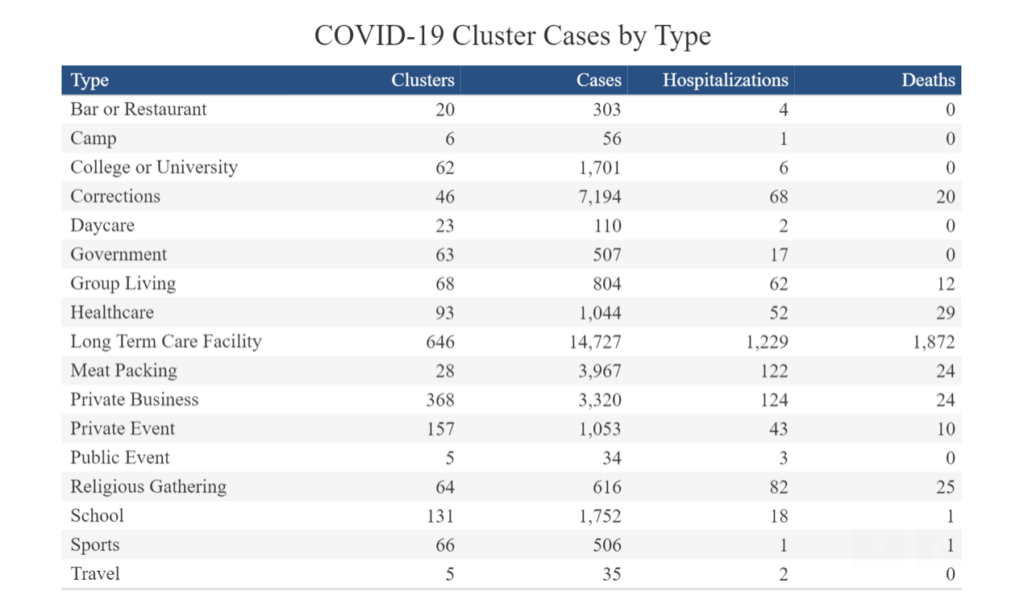 “We can only work with the information available,” Kriegshauser wrote. “If KDHE has non-public figures, I would love to see them. According to the public cluster information we have, my statement is accurate and based on public data.”

Responsible journalists should have asked KDHE to provide what they believed are the real numbers, but instead, they allowed Zears to shed doubt on Kriegshauser’s claim and support their apparent opposition to SB 286.

The Eagle also reported that Attorney General Derek Schmidt questions whether the $1.9 trillion in federal COVID relief funds allows the funding to be used for tax breaks. But that is another misdirection aimed at discrediting Kriegshauser and the legitimacy of SB 268. The legislation does not propose a tax break; it merely allows compensation for losses to be received as a tax credit.  Further, the COVID relief legislation specifically authorizes using federal funds to compensate for business losses.

The Eagle editorializes in one sub-headline within the story, asking whether the compensation provided in SB 286 is a “help or handout” to businesses.

The reporters also write, “One question hanging over the SB 286 debate is whether the money is intended to offset businesses’ actual damages or to compensate them for profits they didn’t make since the pandemic hit Kansas last March.”

Kansas Policy Institute CEO Dave Trabert, who is an accountant by training, says the Eagle’s anti-business bias is apparent in comments of this nature.

“Their sub-headline about handouts and the comment about ‘actual damages’ are journalistically wrong on multiple levels.  Actual damages to a business include lost profits, as that money is not available to pay taxes or invest in the business. To say otherwise indicates the Eagle doesn’t understand business finance and/or they believe profits are not ‘actual damages’.  If the latter, it belongs on the editorial page, not in a news story.”

The Eagle concludes its editorial-masquerading-as-a-news-story by listing billions of dollars businesses received through federal COVID relief programs. For instance, the paper reports, payments include $6.55 billion in forgivable Paycheck Protection Program loans, $2.1 billion in Economic injury disaster loans and grants, and a ‘large’ portion of the $1.25 billion that the state and local governments received last year from Congress.

Trabert says the absence of context in their reporting indicates another attempt to inject the reporters’ personal disapproval of SB 286.

“First, they offer no proof to support their claim that businesses received a large portion of the $1.25 billion sent to Kansas last year, and that isn’t an act of omission.  Journalists would substantiate their claim.  The Sedgwick County distribution report says it gave out $2.2 million in Safe Operating Grants to businesses out of the $100 million the county received last year.  Johnson County gave less than 10% of the $116 million it received.  Governor Kelly announced $37 million in Small Business Working Capital Grants were distributed to about 2,000 businesses, but the State of Kansas took in more than $600 million.  There is no evidence to support the claim that businesses received a ‘large’ share of the money.

“They further show their bias against the legislation by providing no context on the PPP loans. A federal recap of Kansas PPP loans says $5.8 billion was distributed.  That might sound like a lot to some people, but the money was distributed to 71,531 companies, for an average loan of $81,451.  The Kansas Secretary of State’s office says there were over 210,000 businesses and non-profits in 2019 and that doesn’t count proprietorships.  Virtually every company was impacted to some degree, so there are a lot of companies that got nothing.  And by the way, Kansas’s private-sector GDP declined by $13.8 billion in 2Q 2020.  The Eagle seems to want readers to believe that businesses were already compensated for their losses but that simply isn’t true.”