Buried on page 579 of the $1.9 trillion so-called stimulus bill is a provision that prohibits state tax cuts between now and 2024.

“A State or territory shall not use the funds provided under this section or transferred pursuant to section 603(c)(4) to either directly or indirectly offset a reduction in the net tax revenue of such State or territory resulting from a change in law, regulation, or administrative interpretation during the covered period that reduces any tax (by providing for a reduction in a rate, a rebate, a deduction, a credit, or otherwise) or delays the imposition of any tax or tax increase.”

There’s no better way to ‘stimulate’ than to let people keep more of what they earn.  But like most things coming out of Washington under the Biden Administration, this gargantuan distribution of Biden Bucks is primarily about growing government and increasing dependence on government for many people.

“With state revenues soaring nearly 15% above last fiscal year, it’s clear that state government doesn’t need a bailout. Yet Speaker Pelosi and her liberal allies went to great lengths to make sure state legislators can’t help small businesses and families through common-sense tax cuts, tying up dollars in the Governor’s office instead of sending them to the pockets of Kansans.”

But all is not lost.  The Tax Foundation’s Jared Walczak lays out several scenarios wherein state tax cuts should still be permitted.

“Scenario 1: A state reduces one tax, fully offset by increased revenue generated by another tax or fee.

This is almost certainly permissible for a state which has accepted Recovery Funds. There is no plausible use of funds, either directly or indirectly, to facilitate a shift from one tax to another.”

State tax collections for this fiscal year (July 2020 through June 2021) are $180 million above estimates through February.  Using this year’s excess tax revenue to pay for a tax cut could provide $180 million or more in state tax relief.

Walczak also believes state rate cuts that are funded either by a commensurate spending reduction or by capturing revenue growth would be permissible.

Over $3.5 billion coming to Kansas

Last summer, $1.25 billion in ‘stimulus’ money was sent to Kansas.  This year’s distribution 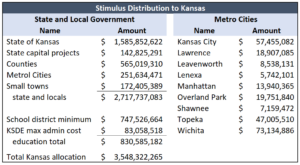 is over $3.5 billion.  The state will collect $1.7 billion, including $143 million earmarked for capital projects.  Another $565 million is going to county governments, cities will rake in $424 million, and $831 million is allocated to school districts and the Department of Education, bringing the total to $3.55 billion.

The City of Wichita is getting $73 million on top of $100 million going to Sedgwick County.  Johnson County rakes in $117 million and cities there will take in over $60 million more.

Unlike state tax cut limitations, the section on local government in the bill contains no prohibition on local tax cuts.  It also specifically provides for payments to offset “negative economic impacts, including assistance to households, small businesses, and nonprofits, or aid to impacted industries such as tourism, travel, and hospitality.”

Accordingly, there should be ways to effectively provide property tax relief by rebating a uniform fixed percentage of city and county property taxes paid by qualified recipients.

The mechanics would require legislative intervention, but state and local officials should be able to get it done quickly if they prioritize taxpayers instead of growing government.

Cities and counties took in $2.8 billion in property tax in 2019 and are getting $989 million in new money, so there is ample opportunity to give taxpayers a sizeable refund and still have a lot left over.

Despite the pandemic, the State of Kansas took in a little more tax revenue last year. Total General Fund tax collections in calendar year 2020 of $7.7 billion were about $51 million 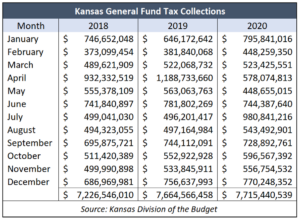 Cities and counties seem to have collectively had a small increase, also.  Calendar year sales tax collections reported by the Kansas Department of Revenue show a total of $998 million in 2020 or about $1 million more than in 2019.

2020 property tax collections aren’t available yet, but a decline is doubtful based on history.

Government bailouts are bad policy and aren’t necessary, but now that billions of dollars are coming,  state and local officials should share the bulk of it with taxpayers.

This story has been updated to reflect revised K-12 funding with new information from the U.S. Department of Education.